A walk to the future for 189 seniors and 1 teacher 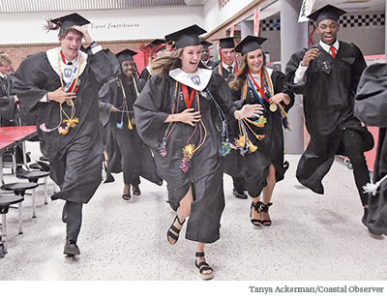 Seniors scramble to get in line for the procession to the gym for the Waccamaw High graduation.

Another school year has come and gone and 189 members of the Class of 2019 officially said goodbye to Waccamaw High School and hello to the  future last night.

First-year principal Adam George said he will always remember these seniors, the first graduating class in his tenure.

“It’s always going to be special,” George said. “They’ve been through quite a year. They’re very resilient. A lot of kids with a lot of goals. They’re going to do great things.”

George said his best advice to the graduates is find something you love to do.

“Whatever you want to do, whether it be work, whether it be college, the military, go at it 100 percent and give everything you’ve got every day,” George said. 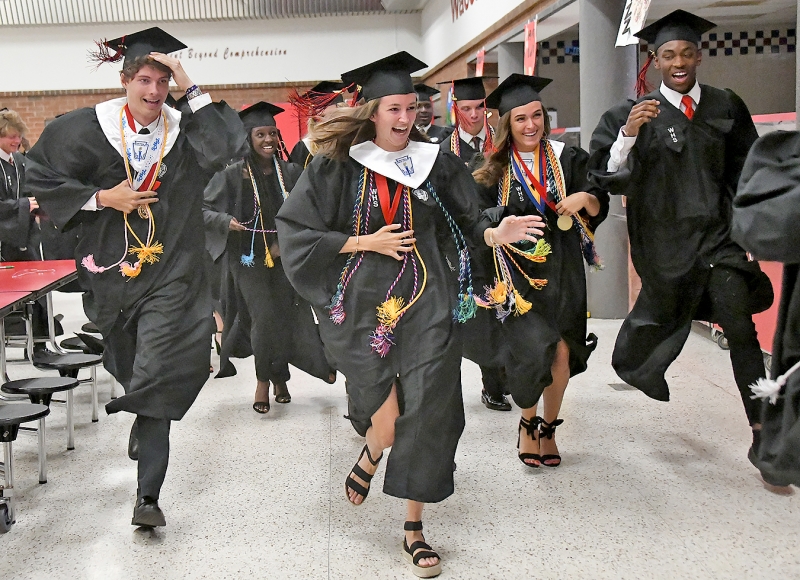 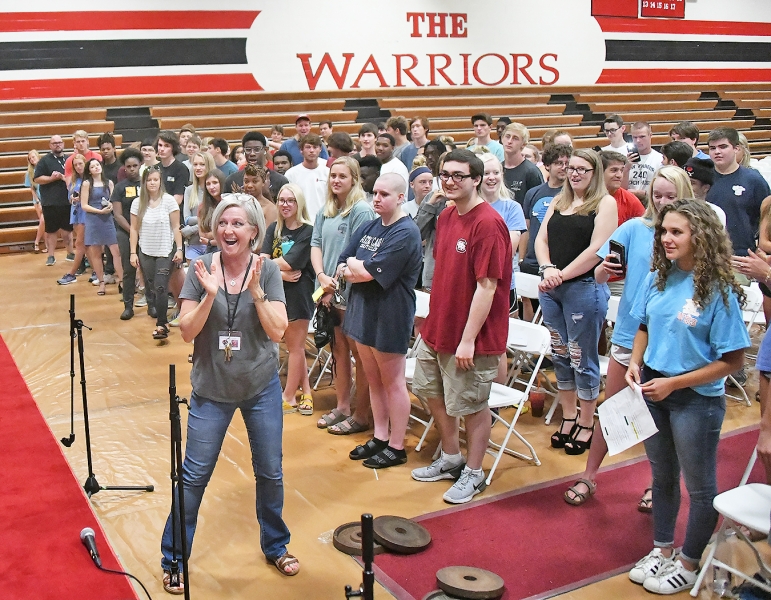 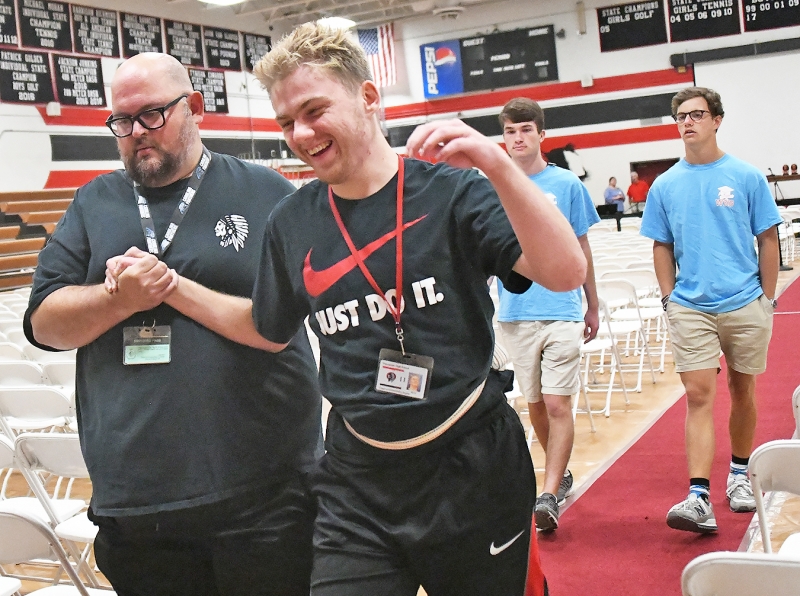 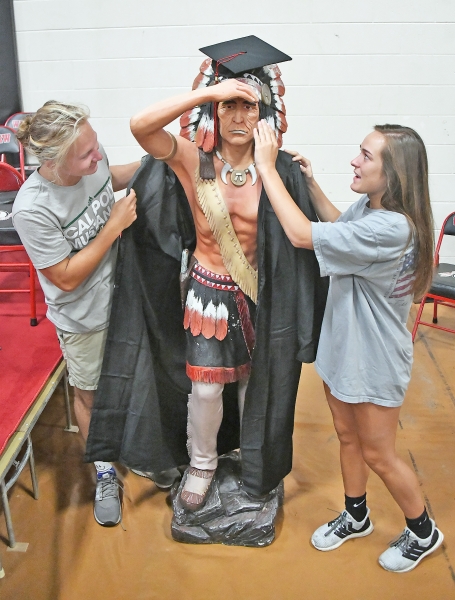 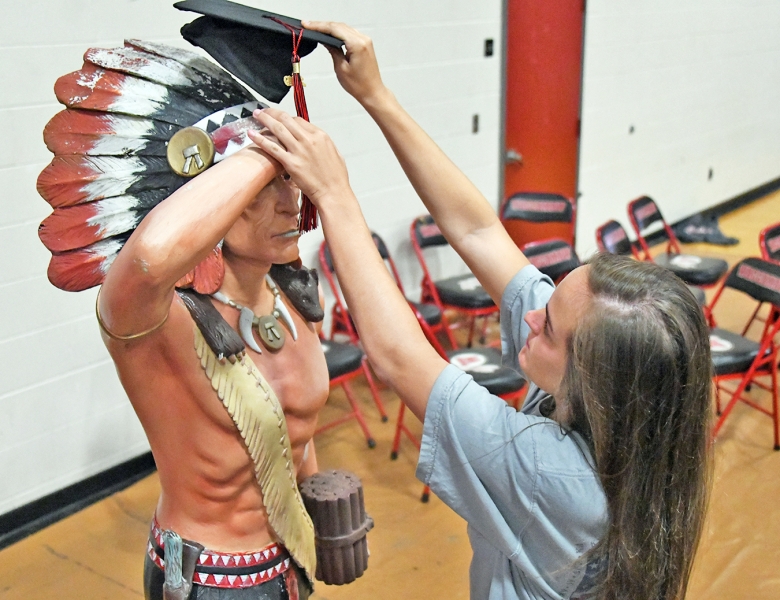 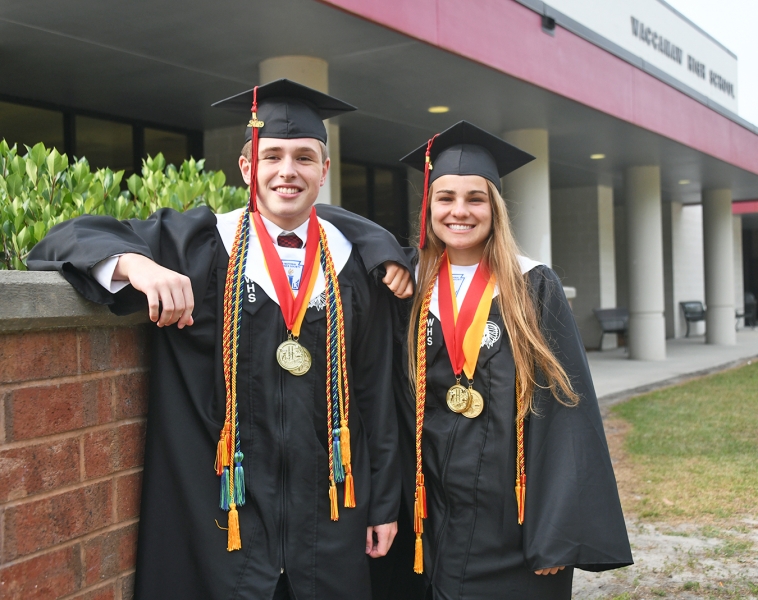 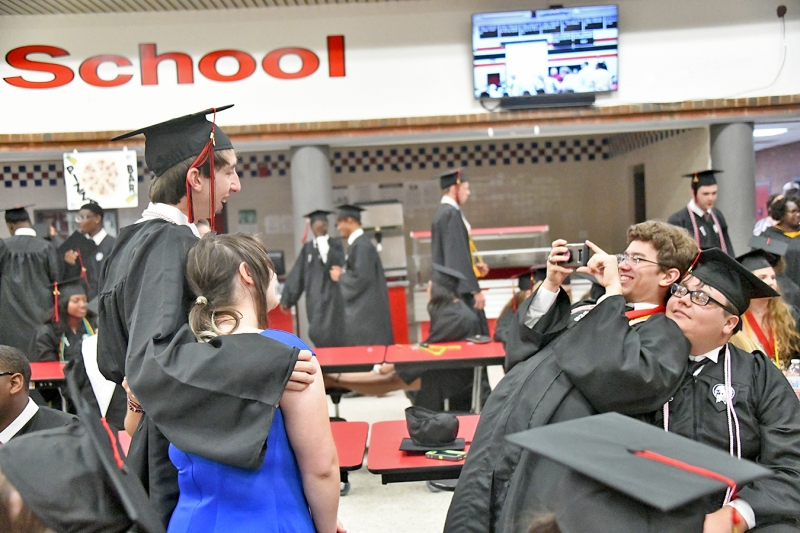 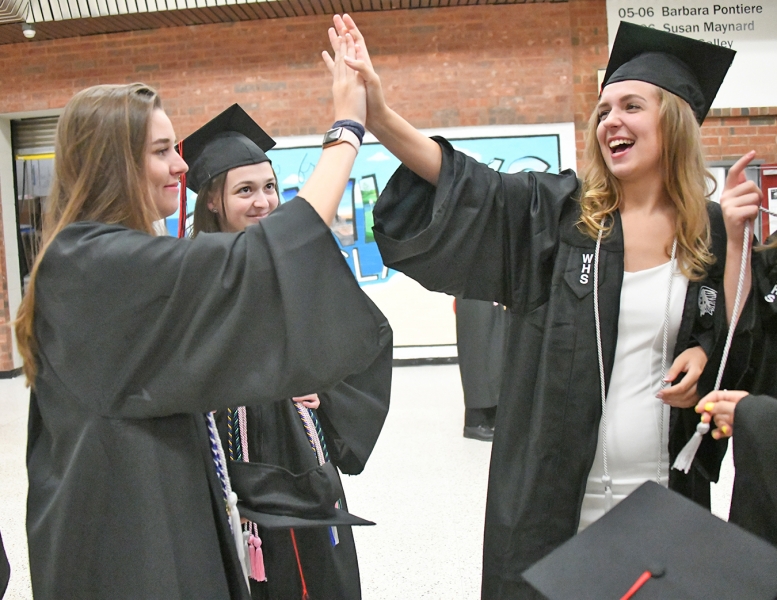 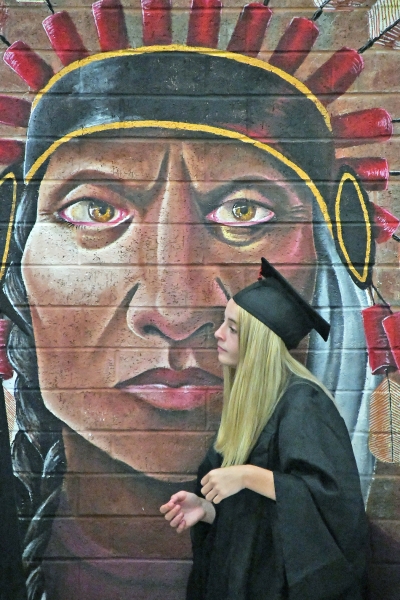 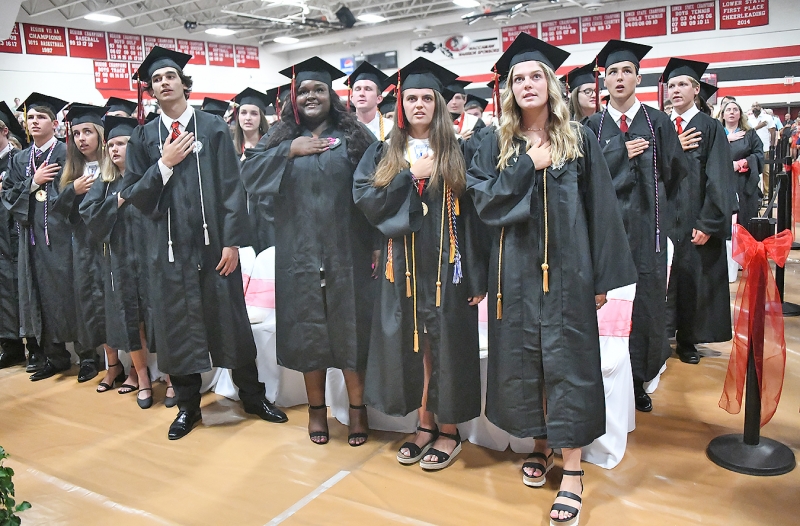 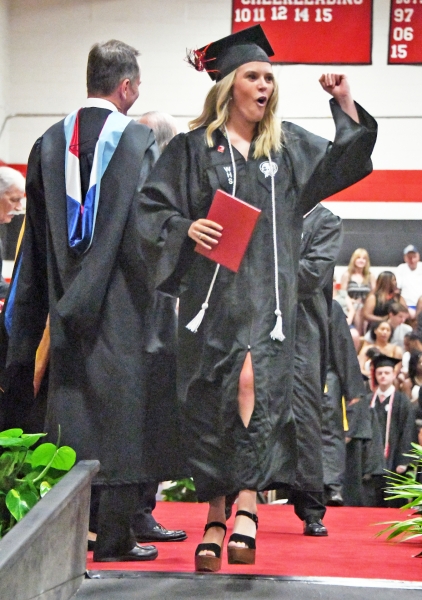 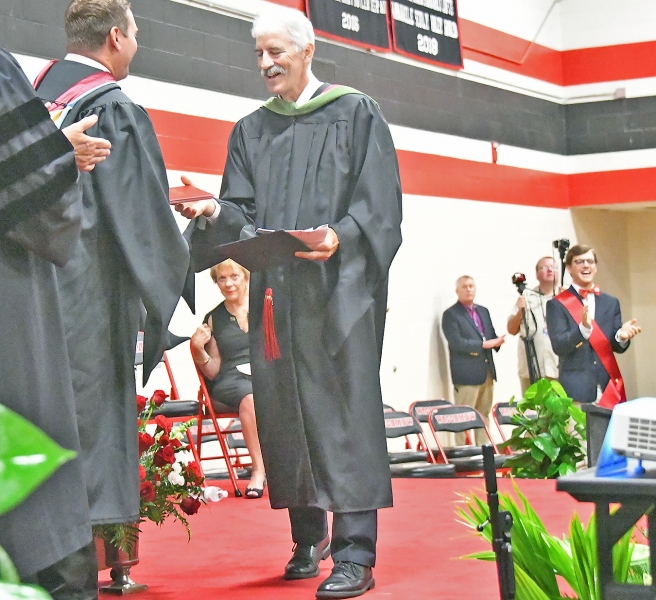 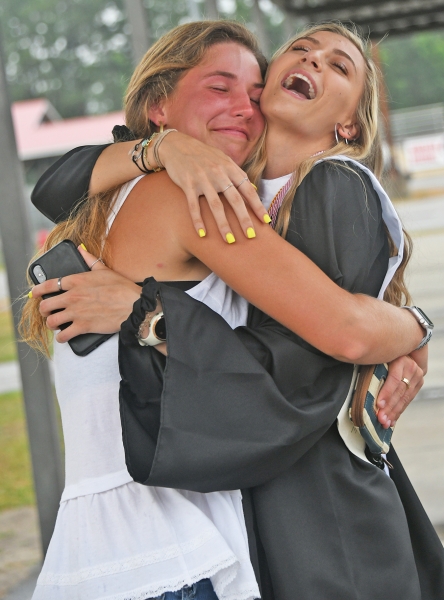 “Losing is not being defeated; quitting or losing the motivation to succeed is,” McCabe said. “We can’t let one failure – or even several failures – define us or weigh us down because then they truly do defeat us. We must keep a short memory and only use our mistakes to guide us in the future instead of dwelling on those mistakes in the present.”

McCabe also encouraged the Class of 2019 to fight “passionately and emotionally” for what they want and what they believe in.

Salutatorian Lena Gammel spoke about the power of choice.

“Every second of every day we make choices,” Gammel said. “We have to live with them. … Choose wisely and make your choices count.”

Gammel praised and encouraged her classmates. “There is so much talent in this room,” she said. “I hope you all live up to your potential.”

This year’s ceremony was bittersweet for Scott Streiffert, who has spent the past 11 years reading the names of the graduates during the ceremony. After 27 years as teacher and coach at the school, he is retiring. When the school was smaller, Streiffert used to teach all the students at some point in their four years, but now he only teaches about 75 percent of them.

“That’s kind of sad,” Streiffert said. “It was kind of cool because you knew every kid as you read their names.”

On Tuesday morning, Streiffert called the entire list of names twice during graduation practice, checking as each senior passed to make sure he had pronounced the names correctly.

“I’m trying to make sure I do everybody’s names right so everybody has their moment,” Streiffert said. “That’s the big thing. … you know that for that family of that one child, it’s that special moment.”

As the graduation practice was winding down, Streiffert posed for a selfie on stage with the seniors behind him, capturing one of the final moments in his teaching career.

Before the graduates turned their tassels at the ceremony, senior William Daniels stepped up to the podium and asked Streiffert to take one final walk across the stage. Streiffert took a shortcut but did shake hands and hug district officials and the school’s administrators.

Streiffert called the names of the seniors from Brandon Sean Ahalt to Cohlton Lee Young.

“I’m happy that I’m moving on, but sad that I won’t be here anymore,” Ahalt said.

Being the first and last in line meant Ahalt and Young got to enjoy watching their friends walk across the stage to get their diplomas.

“I’m happy for them,” said Young, a member of the school’s football team. “It’s cool to see some of my teammates walk across the stage.”

Ahalt said it’s a little less nerve-wracking when you’re the first one and your part is over quickly.

Before the ceremony started the soon-to-be graduates waited patiently inside the school cafeteria.

Senior Katie Spence said the one word to describe her class would be “extraordinary.”

“Everybody cares for each other, nobody bullies each other,” Spence said. “It’s just a zone of happiness toward one another.”

There were some anxious moments as a few of the boys did not wear a tie and several wore something other than black dress shoes.

Nell Stephenson, the science teacher who oversees the ceremony, sent some boys home for ties and solved the shoe dilemma will duct tape.

“We did not say black dress shoes and no tennis shoes so they showed up wearing black Vans and black Nikes with white strings and a white stripe,” Stephenson said. “We’ve already said that next year we want the parents in the meeting.”

Graduation was just the first of two major life events for Rudy Phillips this month. He enlisted in the Marine Corps and is headed to boot camp on June 17.

“I wouldn’t be honest if I told you I was excited for boot camp, but I’m excited for the whole experience,” Phillips said. “I’ve wanted to do it since I was a kid. Not always the Marines, but always the military.”

As the time for the ceremony drew near, district staff and administrators led the seniors down a long hallway toward the door where they would go outside and then enter the gym. About two-thirds of the class made it to the gym doors together, while the rest were sent back to the cafeteria because they were out of order. Eventually the Class of 2019 was reunited and entered the gym to the strains of “Pomp and Circumstance.”