After 105 years, one regret: giving up that ’61 Corvette – Coastal Observer 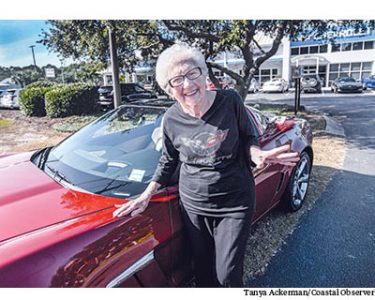 It’s been 21 years since Mary Shumpert sold her beloved 1961 Corvette, and she still misses it dearly.

“I wish I had it right now,” Shumpert said.

Now 105 and no longer able to drive, the feeling of loss has not dimmed. Her face lights up when she talks about it, or when she thinks she sees one.

Shumpert carries pictures with her of the 1961 Corvette she used to own, has a beaded Corvette T-shirt, and has visited the Corvette Museum in Bowling Green, Ky., several times.

Five years ago when Shumpert turned 100, Harris bought her a Mercedes Benz E-350 convertible. It has a back seat for Harris’ grandchildren.

Shumpert gave up her driver’s license when she turned 104, but still gets a thrill out of riding in a car with the top down.

The 1961 model was the second Corvette the family owned. Shumpert’s husband, Sonny, purchased a 1960 model that had a stick shift and needed to be at around 60 mph to get into second gear.

It was hard to get up to that speed near the Shumpert home in Columbia.

“It just wasn’t practical to have that car,” Harris said.

Sonny traded the 1960 model for the 1961 model, which was an automatic. The family joke at the time, Harris said, was that it was a present for her 14th birthday. But it was always her father’s car until his death in 1987.

“Anybody could drive the car all they wanted to as long as he was in the passenger seat,” Harris said. “It wasn’t going anywhere without him.”

The Shumperts used to own the Columbia Grill in downtown Columbia. They moved to Sumter after retiring and to Heritage Plantation after Sonny’s death.

Shumpert said being 105 years old has its advantages.

“Everybody treats you with so much respect,” she added. “At my age you expect respect.”

Harris said her mother doesn’t like to be the center of attention.

“She’s a party girl, so she likes the party part of it, but she likes to be a part of the party, not at the center,” she added.

Shumpert spent part of the day before her birthday at Coastal Chevrolet Cadillac Nissan checking out some of the convertibles. On her birthday, family and friends gathered for dinner at Frank’s. Precious Blood of Christ Catholic Church also honored Shumpert with a papal blessing on Sunday during Mass and a cake big enough to serve the congregation.

On Monday, Shumpert and Harris jumped into the Mercedes and drove to Amelia Island, Fla., for a vacation.

What’s the secret to living so long?

“Be nice to everybody and appreciative,” Shumpert said.

She expects to live for a long time yet. “I ain’t going nowhere,” she said.