As delegation seeks appointees, one still in doubt – Coastal Observer

As delegation seeks appointees, one still in doubt 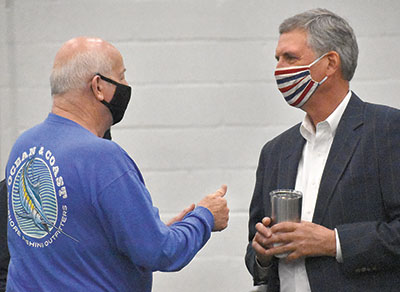 James Sanderson, left, talks with U.S. Rep. Tom Rice. He is being proposed for the county Election Commission.

Whether James Sanderson or his son, Jamie, is nominated to fill a vacancy on the Georgetown County Election Commission may not make a difference in a looming rift between the state lawmakers who represent the county.

State Sen. Stephen Goldfinch, the Murrells Inlet Republican who chairs the delegation, said last week that he opposed a plan by state Rep. Carl Anderson, a Georgetown Democrat, to name the younger Sanderson to the seat because he had once served as chairman of the county Democratic Party.

But it is the elder Sanderson who said he was asked to serve by Anderson. He is president of the local chapter of the United Steelworkers Union. “I’ve never served as Democratic Party chairman,” he added.

He did run as a Democrat for Georgetown County Council in District 2 in 2008. He lost to Ron Charlton, a Republican.

“I’m glad to know it’s James,” said Goldfinch, who said he got his original information from the delegation office. “I’m named after my dad, so I understand the frustrations.”

Anderson did not respond to messages left at his legislative office seeking comment.

Sanderson has served previously on the county Election Commission. He also left the Democratic Party for the GOP in 2010, saying the Democrats no longer supported working people.

For the Election Commission, that means making it easy and convenient to vote, he said.

“I don’t think there should be any type of hindrance or road block imposed on people trying to vote,” Sanderson said. “I think it’s sad that people have to fight to try to vote.”

Although reassured that it is the more bipartisan of the Sandersons who is up for a vacancy, Goldfinch said “we’ve got a lot more issues to work through other than Jameses.”

His concern is that a party-line vote would favor Anderson and state Sen. Ronnie Sabb, a Greeleyville Democrat, because the delegation voting is weighted according to the share of the county population each member represents. That puts Goldfinch and state Rep. Lee Hewitt, a Murrells Inlet Republican, in the minority.

The delegation office sent out a list of eight boards and committees with vacancies that need to be filled by the four local legislators. That was Monday. The deadline to apply is Friday. The delegation will meet March 29.

The delegation should be able to fill three of the four vacancies on the seven-member board of the Georgetown County Water and Sewer District, Goldfinch said. One person proposed for the board didn’t pass a background check by the governor’s office. The governor makes the actual appointment.

There are also vacancies on the Murrells Inlet-Garden City Fire District, the County Transportation Committee, the Waccamaw Regional Council of Governments, the Rural Community Water District, the Saltwater Recreational Fisheries Advisory Committee and the Horry-Georgetown Tech board.

In other counties, there is always a stream of applicants, Goldfinch said.

“In Georgetown County, I don’t know what it is,” he said. “I have to go looking.”