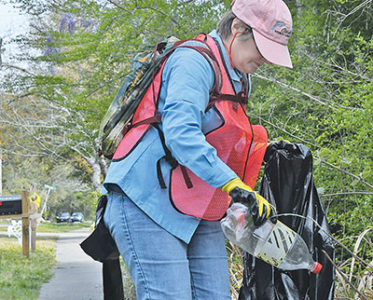 A weekend cleanup included the Waverly Road sidewalk, which is park of the Bike the Neck expansion plan.

Georgetown County has the long-sought easements to build the next phase of the Bike the Neck trail through North Litchfield, but bikes will likely continue to share the neighborhood streets for the next two summers. The project missed out on state funding and Georgetown County wants to use its capital funds to leverage the state grant.
“I just wanted to put this in place before another season put even more people in jeopardy,” Linda Ketron, a founder of Bike the Neck, said.
A route under the Santee Cooper transmission lines from Boyle Drive north to Trace Drive has been planned for seven years. The project received a $100,000 grant from the state Department of Parks, Recreation and Tourism for construction, but Georgetown County, which owns the path, could not get an easement from the heirs who own one parcel along the route. The grant was returned in 2014.
While Georgetown County won’t pay for easements and is reluctant to use eminent domain, the Litchfield Beaches Property Owners Association agreed to allocate $40,000 toward the North Litchfield connector. A portion of the funds was used to buy easements, although the prices have not been disclosed.
But the easements were completed in December, three months after PRT turned down another grant request from Bike the Neck because the easements weren’t in hand.
Ketron got a commitment from County Administrator Sel Hemingway to use $280,000 in funds earmarked for bikeways in the county’s capital improvement plan for the North Litchfield connector.
But the property owners association board turned to state Rep. Lee Hewitt to try to get PRT to reconsider the grant request.
The agency was “very receptive to the idea” of the connector, Hewitt said. “We have to go through the grant cycle.”
If the state is going to fund the grant, the county can save $100,000 for other projects. “So that was off the table,” Ketron said.
A Bike the Neck fundraiser last month was actually planned in the fall as a ground-breaking for the North Litchfield project, Ketron said. The event raised $4,100 that will be used to match any grants the group receives, but she said donor fatigue is setting in.
“I said this was my swan song for this phase of the bike path. I can’t keep coming back to the well,” Ketron said.
This year’s PRT trails grant cycle doesn’t start until September and the awards won’t be made until June 2020. Construction is unlikely during the summer.
“It has set us back,” Ketron said.
She is also concerned about the cost of the project. It was initially estimated to cost less than $100,000. Now the estimate is $280,000. One reason for the increase is the need to cross wetlands under the power lines that were not identified in the original plan.
But even without the wetlands, Ketron said, “every year it’s bumped up another $20,000 to $40,000.”
Hemingway agreed with her concerns, but pointed out that the money for bike paths in the capital plan is intended to match other funds.
“I do not blame Sel Hemingway for deciding to wait,” Ketron said.
And while she disagreed with the POA’s idea to have Hewitt lobby PRT for funding, she said the group’s help with the easement purchase was vital. “No prior segment of this pathway had to be purchased,” she said.
“It never hurts to ask,” Hewitt said. “Maybe there’s grant money left over. Unfortunately they didn’t have any.”
He said the agency is aware of his interest. “I think we’ll be viewed favorably,” he said.
Bike the Neck will move forward with its next priority, replacing the sidewalk along Waverly Road with a bike path from Waccamaw Elementary School to Highway 17.
“That is a safety connector. Everything is a safety connector,” Ketron said.
After that will come an extension of the path along Kings River Road to Waccamaw High.
“When we first started this there was not a high school kid who would be caught dead on a bicycle. How uncool?” Ketron said. “Now, with the environment and ecology concerns and health and fitness issues rising to the surface, they want a bike path to the school.”