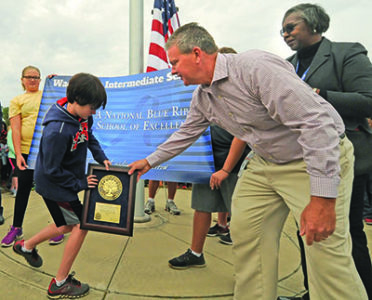 Principal Tim Carnahan organizes a presentation for the Blue Ribbon award in 2016.

Students and staff at Waccamaw Intermediate School began a frenzied search this morning for Chomper. The plush toy alligator can be elusive. Just before the winter break, it was found hidden in the lost-and-found.

“Go into a school and look for dimples. Dimples on the staff, dimples on the kids. If they aren’t happy, something’s wrong,” said principal Tim Carnahan. “If you create that good climate, that alone is going to improve test scores.”

But the search for Chomper, which Carnahan hid in advance of Spirit Day activities that mark the end of the second semester, isn’t only for fun. Clues went out with the morning announcements. Each class works to find the stuffed mascot. “If you’re going to get a job at Boeing, you better know how to do team problem solving,” Carnahan said.

That kind of thinking put Waccamaw Intermediate on the list of nine finalists for the Palmetto’s Finest Awards, given each year by the S.C. Association of School Administrators. They recognize innovative and effective programs.

“It’s an honor,” Carnahan said, one of the few that the school hasn’t received. It was named a National Blue Ribbon School by the U.S. Department of Education in 2016. “They came to us, we didn’t go to them,” he noted.

The school staff decided last year to apply for the Palmetto’s Finest Award. It made the shortlist for a visit by an evaluation team. The finalists were announced Tuesday. The winners will be announced in March.

Waccamaw Intermediate applied for the award in 2012. It didn’t win, but a judge told Carnahan, “don’t quit.” But the application process was so detailed, the staff decided to focus its attention on curriculum.

Waccamaw High won a Palmetto’s Finest Award in 2008. It was a finalist the previous two years.

Carnahan said the process has changed. “All we did was write about what happened in our school. You don’t have to make things up,” he said. The follow-up visit was unannounced, unlike in the past. “They see who you really are.”

Waccamaw Intermediate opened 11 years ago. It took the fourth and fifth grades from Waccamaw Elementary and the sixth grade from Waccamaw Middle. The core of the school’s success began with training done at the elementary school when the district approved an International Baccalaureate curriculum for the Waccamaw schools. The program didn’t last, but the training and concept of teaching concepts across different areas of the curriculum remained.

“We’ve been growing for 11 years, but at turtle speed,” Carnahan said. “We’re starting to snowball now.”

Along with Spirit Day, the school will mark the change in semesters with new themes for its “inquiry base learning” that will decorate the school.

“The awards the school has collected are a reflection of the community and the support they have given us,” Carnahan said.