Community comes to the aid of injured bobcat – Coastal Observer

Community comes to the aid of injured bobcat 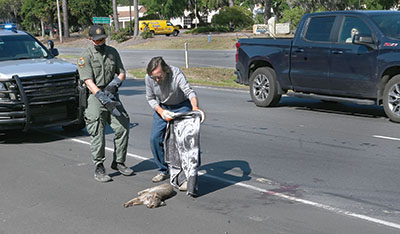 Rob Doerr prepares to pick up the bobcat and take it to a sanctuary for treatment.

Sunday morning traffic was light, but Ben and Jennifer Rozak took a risk to keep it away from the bobcat that lay sprawled on the edge of Highway 17 near North Litchfield.

“We tried to protect him as much as we could until somebody could get here,” Jennifer said.

The couple spent two hours with the wounded animal before it was picked up and taken to Wild Things Freedom Center in Plantersville.

“His condition is still guarded,” said Dr. Amanda Hughes, a Murrells Inlet veterinarian who serves on the Wild Things board. “He definitely had a head injury.”

The Rozaks live in Mingo and regularly walk and jog along the Bike the Neck path at North Litchfield. They were walking north around 7:45 a.m. when they saw the bobcat at the edge of the northbound lane.

“My wife thought it was a dog. I walked up and could see the ears from the back. I said, ‘that’s a bobcat,’ ” Ben said.

When they got closer, they could see that it was still breathing.

While Jennifer stood on the pavement, Ben called the sheriff’s office. A dispatcher said the call would be referred to the state Department of Natural Resources.

People walking and cycling along the path stopped to look at the bobcat.

“He started to get a little agitated,” Rozak said. “We tried to keep people back.”

He saw a sheriff’s office SUV and flagged it down.

Deputy Jeremy Colbert parked in an acceleration lane with his blue lights on to protect the bobcat from traffic.

“He stopped out of compassion,” Rozack said. “I can’t say enough about him.”

A wildlife officer, John Hamblen, phoned to say he was on his way.

The bobcat was bleeding from its mouth. It still  managed to move closer to the road shoulder.

“He just kind of rolled and pulled. I knew he had some fight in him,” Rozack said. 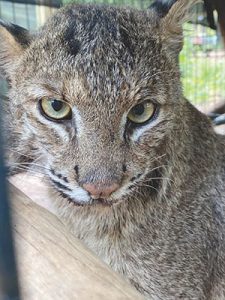 The bobcat in now at Wild Things Freedom Center.

As time passed, Rozak called Hamblen to see when he would arrive.

Jack and Carolyn Simcsak, who live in the River Club, were out for a Sunday drive in their Corvette when they passed the scene heading north.

Carolyn is part of a Facebook group that helps people find lost pets.

When they passed again, “we saw these people still standing there. I said, ‘Jack, pull over because I want to see if it’s a dog or not.’ I saw it was a bobcat and said, ‘I’m calling Rob.’ ”

Rob Doerr, who lives at Litchfield, got involved in wildlife rescue after retiring from the military. He helped at the SC Cares sanctuary in western Georgetown County, which closed in 2019.

He arrived just before Hamblen. “He probably would have called me if Carolyn hadn’t,” Doerr said.

He covered the bobcat with a large towel. The animal tried to stand, but soon went limp.

Doerr put the bobcat into an animal carrier that he placed on the front seat of his pickup.

Doerr didn’t say much to the Rozaks or the Simcsaks. He didn’t want to raise their hopes for the bobcat’s recovery. He knew the animal had suffered a head injury.

“He was amazingly calm on the way down,” Doerr said of the trip to Plantersville. “He actually got a little feistier when we got him out of the crate, which was a good thing, actually.”

Doerr said he usually sees about one bobcat a year. This was his fourth one this year. At 20 pounds, “this was the biggest,” he added.

Hughes treats the small and the exotic animals at Wild Things. This was the first bobcat she has treated. She found it had a broken ear drum and a cut under its tongue. There were injuries to the right side of its face.

“We can’t rule out that something may be going on internally,” she said.

Hughes is also concerned that the head injury affected the bobcat’s vision.

“He has this stunned little look,” she said. “I’m not convinced he is able to see anything.”

The bobcat is receiving antibiotics and pain medication. It is being kept in a pen in a natural setting that’s secluded, Doerr said.

From the nature of its injuries, it’s not clear whether the bobcat was hit by a vehicle or ran into a vehicle itself as it crossed the highway. But roads are a common factor in wildlife rescues, Doerr said.

“It’s pretty much a sign of the times,” he said.

“We get a lot more people looking out for wildlife,” Doerr said. The Rozaks stood by the bobcat for two hours, he added. “That doesn’t happen everywhere.”

Ben Rozak said if he hadn’t been on foot, he would have been tempted to try to move the bobcat to safety even though everyone he spoke to Sunday morning told him not to touch the animal. “I came this close,” he said. “The last thing I wanted was for him to go into the woods.”

Wild Things has rescue advice and resources on its website, wildthingsfc.org.