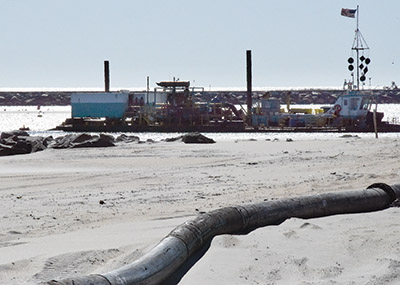 A dredge works behind the north jetty to Murrells Inlet in 2017, when the work was funded by Georgetown County.

A $6.1 million allocation of infrastructure funds will allow the Army Corps of Engineers to dredge the federal channel at Murrells Inlet and place sand on the beach, a project last done in 2017 and funded by Georgetown County’s capital projects sales tax. No timetable has been set for the work.

“We anticipate basically repeating that project, but now using federal funds,” said Jeff Livasy, chief of civil works for the Charleston District. “We’re excited to be able to do this project with federal funds.”

Funds from the Infrastructure Investment and Jobs Act signed into law last year meant the dredging could be done sooner than if the money came through traditional appropriations. The announcement came as a surprise, though a welcome one.

“It’s gotten dangerous. That sand is stretching almost to the south jetty,” state Rep. Lee Hewitt said. “This money came as a surprise to everybody.”

The state and Georgetown County are also working on plans to dredge other areas of Murrells Inlet. Engineers hired by the county to create a master plan for dredging  estimated that there are 750,000 cubic yards of material that need to be removed to make the waterways navigable. That material is outside the federal channel and will include silt that cannot be placed on the beach. Part of the study includes finding an offshore disposal site.

The Corps project will pump sand from the channel onto the beach at Garden City.  “Any time you can restore a channel and put sand on the beach, it’s a good story for us to tell,” Livasy said.

There is a deposition basin on the north side of the north jetty to Murrells Inlet that traps sand that moves in the current. Cleaning that out will extend the life of the dredging project, Livasy said.

The Corps gets funding for annual surveys that show the condition of the channel. The frequency of dredging is hard to predict.

Proposed projects also have to compete for funding with others in the district and in the region.

The funding for Murrells Inlet was part of over $21 million received by the Charleston District under the current infrastructure bill. It also got funds through emergency appropriations in 2018 and 2019.

“Without IIJA, we would be in our regular budget cycles,” Livasy said.

Boaters have complained about the condition of the federal channel, which runs from the jetties to an area south of Marlin Quay Marina, Hewitt said. There is also concern that the channel is trying to cut behind the south jetty at Huntington Beach State Park.

“It will be interesting to see what they do this time,” Hewitt said.

The renourishment portion of the 2017 project has held up well, he added, “except at the jetty.”

The federal funds are part of a three-year program. With the local project expected to start in 2024 or 2025, there could be some coordination with the new federal project, Livasy said. The key to the local project will be getting federal permits to dispose of the spoils offshore. With the land-based disposal used for past projects, “the cost of disposing of that and dumping the silt about doubles the cost of the project,” Hewitt said.