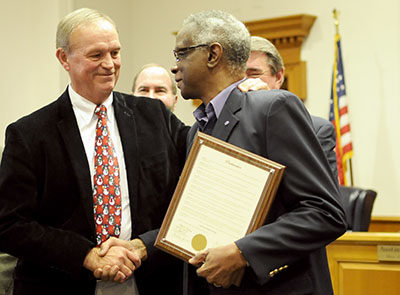 Sel Hemingway will retire as Georgetown County administrator at the end of the year. His announcement to County Council members in a closed session this week followed a meeting in which Hemingway reminded the members that this year’s $90.5 million budget is not sustainable.

“None of that was really factored into this,” Hemingway said afterward. “That was the path that I was on.”

He plans to lead efforts to create a balanced budget for the coming years and develop the next phase of a new capital plan, which could see the return of a local sales tax.

Hemingway was the County Council chairman in 2008 when he was hired to replace Tommy Edwards, who retired as administrator. He was only the fifth administrator since county governments received more autonomy under legislation passed in the 1970s. The first, Al Schooler, was both the council chairman and administrator.

Hemingway was hired over two other finalists, one from North Carolina and another from Arizona. He had managed his family’s car dealership in Andrews for 30 years and spent 11 years on the council. He was also a certified public accountant.

Hemingway said he will present County Council with some options next month for finding his replacement. “The perfect candidate would be someone with South Carolina experience,” he said.

Council Chairman John Thomas said he doesn’t envision a national search for Hemingway’s replacement. The council would like to find someone already working in the state.

The decision follows what Hemingway called the most difficult budget process of his tenure. It also comes as the county prepares to hold a special election in his former district to replace Austin Beard. Beard resigned this month after a ruling from the county election commission that he was not properly registered in his district, as required by law.

Hemingway, a long-time friend of Beard’s, was also criticized by members of the NAACP who filed the residency challenge for not reporting the issue. Hemingway said monitoring the council members was not his job.

He told council that neither the budget nor Beard were factors in his decision. “I probably two years ago could have made the prediction that about this time I would be making this announcement,” Hemingway said.

He will turn 66 in January. He has two brothers who want help with their businesses. He also has 14 grandchildren and wants to spend more time with them. They all live within 20 miles.

But the decision caught the council off-guard. “It was a startling surprise,” Thomas said.

The council will balance its fiscal 2020 budget by drawing on reserves and allocating federal and state disaster reimbursements to offset deficits in several areas. Hemingway told council before his announcement that he wants to start work in July on the fiscal 2021 budget. “This is not a sustainable model,” he said. “We’ve got some work to do.”

Hemingway would like to be able to provide his successor with a road map to a balanced budget. For the next administrator, “they’ve got the opportunity to be part of the solution,” he added.