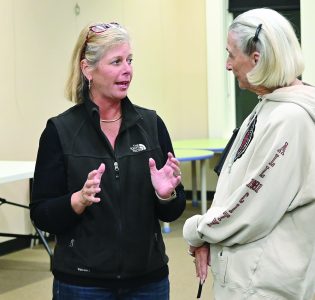 Georgetown County Council doesn’t have new election districts, but it does have its first candidate.

Stella Mercado, a co-founder of the tech firm Mercom, announced this week that she will run as a Republican for the District 6 seat now held by Council Member Steve Goggans, who will not seek re-election. If elected, she would be the first woman to represent the Waccamaw Neck on the council.

Mercado said she was tired of being a spectator in public affairs.  “When you move here and your children are small, you’re really focused on work and your family life, even though you know there are things out there that need attention,” she said.

Mercado remains CEO of the company that she started with her brother, Larry, in 2000. But she now has someone running operations. Her husband, Mark, is retired. Her sons, Alex and Nicholas, are 11 and 8.

County Council has started the process to redraw the lines for its seven election districts using data from the 2020 Census. That must be completed before candidate filing begins in March.

Mercado lives in Willbrook, which is part of District 6. The district now has 1,853 people more than the target population and will be reduced in area to reach that target.

She didn’t want to wait for the final district lines to announce her candidacy. “Once I make a decision, I don’t want to sit back and wait,” she said.

In her announcement, Mercado focused on protecting natural resources and the quality of life and managing growth. She wants to leverage the opportunity zones created as part of a package of federal tax cuts in 2017 to boost economic development outside the Waccamaw Neck. Her background in a business that deals with federal contracts will help, she said.

This is Mercado’s first run for public office. She set up a campaign committee led by John Napier, who represented the county in Congress in 1981 and 1982.

“This is just me putting myself out there,” she said. “The politics of today is a lot of yelling and screaming and that’s not me.”