County draws line in the sand at 2 feet for holes 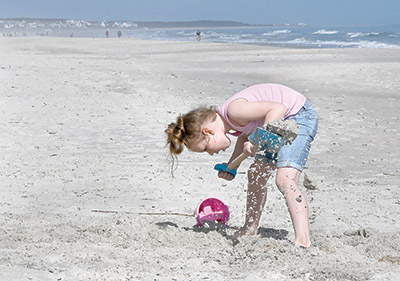 Emmi Haack, 6, a first-grader at Waccamaw Elementary, looks for treasure in a hole she dug at Litchfield Beach on Presidents Day. The county is moving to limit holes deeper than 2 feet dug with anything other than toy shovels.

Holes dug on the beach for recreation can be no deeper than 2 feet under a regulation approved by Georgetown County Council this week.

The holes have to be filled in before the people who dig them leave the beach and only children’s toys or gardening tools under 12-inches in length can be used for digging.

“I tried to put it in the positive,” Jay Watson, the county attorney, said. “Rather than saying you can’t do it unless you do so and so, we said you can, but follow these” rules.

Nancy Crawford, who monitors sea turtle nests, said she was pleased with the ordinance, which she first asked the county to adopt last year. The holes are a threat to nesting turtles trying to reach the dunes to lay eggs and to the hatchlings that head to the ocean.

“It thoroughly addresses the needs that we have on the beaches to avoid the holes that are being dug every year – bigger and bigger,” Crawford said.

The holes are also a threat to people who walk the beach, she noted.

Watson said he looked at 13 ordinances from beach communities in the Carolinas. “I think you’ve got a good, workable ordinance  here,” he told the council.

Council Member Raymond Newton questioned the fine. “Is that the going rate with our sister counties to the north and south?” he asked.

Only one of the ordinances Watson looked at included a fine. That one was $100.

Watson settled on $20, “the thought being something that would be enough to get the violator’s attention, but not ruin their vacation,” he said.

S.C. United Turtle Enthusiasts plans to install signs at 10 beach walkways that list ways people can protect sea turtles, Crawford said. That will include a reminder to fill in holes.

The signs have been approved by the state Department of Natural Resources and the county Parks and Recreation Department, she said.

“Hopefully, we’ll have less issues this summer,” she said.

“I understand it’s a problem,” said Council Member Bob Anderson, who added that he doesn’t understand the appeal of digging holes. “What kind of a vacation is that?”