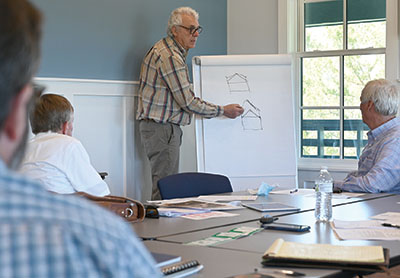 David Graham explains the impact of changing the roof pitch.

Four rules intended to preserve the “Pawleys look” could take effect in May under a timeline worked out by members of Pawleys Island Town Council and the Planning Commission this week. The rules were reduced from a list of six adopted by the commission last month.

New houses will be required to have a 9/12 roof pitch; the second floor can have no more than 80 percent of the heated square footage of the first floor; first and second floor porches cannot be “stacked”; and aluminum, vinyl and faux stucco siding are not allowed.

The rules are intended to preserve the cottage-style design of older houses on the island and turn the tide on what officials say is a rising number of boxy-looking houses.

Mayor Brian Henry pulled out a “Don’t Box the Neck” bumper sticker from his days on the Georgetown County Planning Commission when he opposed big-box retail stores on the mainland. “Don’t box the island, is kind of what we’re saying,” he told council and commission members at a workshop.

While the town Planning Commission also proposed a rule against “boxy design,” John Hildreth, who chairs the commission, said the four rules up for adoption should be enough to prevent that look.

But he pointed out that there are few houses on the island that actually meet the proposed rules. “You couldn’t build my house with these,” he said.

If an existing house was destroyed by a natural disaster, it could be rebuilt to its original design under the current provisions of the town’s development ordinance, said commission member John LeMaster. It would only have to comply with current building codes and flood regulations.

Council Member Sarah Zimmerman questioned the change in roof pitch, which the town now requires to be 7/12 (7 inches of rise for every 12 inches of width).

“To me, the roof pitch is important,” said David Graham, the architect of Town Hall who is advising the commission. The steeper pitch ensures the look while also creating space on the second floor, he explained.

Combining that with the 80 percent limit on the second floor will result in houses with dormers, a traditional island feature, Graham added.

While the rules will scale down the appearance of houses, Graham said they need to be supported by a statement of intent that will govern how those rules will be interpreted. That is a common feature of architectural guidelines in communities and municipalities, he said.

A proposed rule that would have required houses to have porches around at least half of their first floor perimeter was dropped since most houses have porches anyway. The rule on stacked porches replaced a proposal to limit the size of second floor porches. The new rule is intended to break up the box-like appearance of houses.

Town Council plans to give the first of two required readings to the rules in May. By invoking the pending-ordinance doctrine, they can be enforced before final approval, Henry said.

A public hearing will be required before the final reading.

“You’re going to get some push-back,” Graham said. “It has to be formalized and you have to have a process.”

That process would require owners to submit plans to the town administrator. The plans would be reviewed by an architect under contract with the town for compliance. The council and commission members proposed that three members of the commission serve as a review board that would approve the plans. If an owner disagrees with the decision of the review board, it can appeal to the full Planning Commission.

Administrator Ryan Fabbri said he doesn’t know any other town where the commission fills that role. “I’m not sure it could be structured that way,” he said.

Henry said he liked the concept, but said the town would check to make sure it complies with state law before the required amendments to the development ordinance come up for first reading.

“We can think of a lot of reasons not to do this,” commission member Buddy Keller said. “But we’ve seen what happens.”