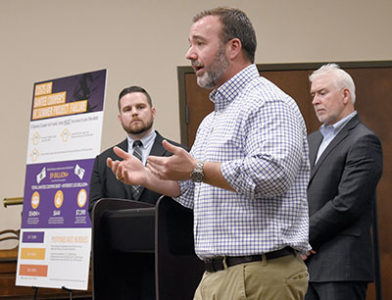 Investors are proposing to resume construction on reactors at the V.C. Summer nuclear power plant or convert the plant to natural gas. Those options need to be weighed before the state legislature considers offers to sell Santee Cooper, the state-owned utility, state Sen. Stephen Goldfinch told constituents this week.

“These are legitimate, well-financed companies that know what they’re doing,” Goldfinch said following a forum on the sale hosted by the Georgetown County Republican Club. It drew about 40 people.

The expansion of the Summer plant collapsed in 2017 with the bankruptcy of its contractor, Westinghouse, leaving Santee Cooper, a minority partner in the venture with SCANA Corp., with about $4 billion in debt. The state received proposals from 10 companies to buy Santee Cooper and a review committee hired a consultant that narrowed those down to four.

“The number for the top tier bid is not $4 billion. It’s approximately $9 billion. The best estimates are that Santee Cooper is worth $9 billion to $12 billion,” Goldfinch said. “The state could be losing $2 billion to $3 billion in equity.”

The four proposals to buy the utility come with pledges to assume all of Santee Cooper’s debt, maintain low rates and maintain its local workforce.

Under the proposals being pitched to lawmakers, companies that would restart the project would also assume the debt and operate the Summer plant as an independent power generator, Goldfinch said. The site became the property of the state after SCANA’s interest was abandoned when the investor-owned utility was bought by Dominion Energy.

The state can’t evaluate the sale of Santee Cooper without considering the Summer facility, but it is not included in the consultant’s report on the buyout offers, Goldfinch said.

A survey last year by the S.C. Club for Growth found that less than half of Santee Cooper customers and those who get power generated by the utility from electric cooperatives were aware of the “nuclear debacle,” said R.J. May, the director of the conservative group. The more people learn, the more likely they are to support the sale of Santee Cooper.

Without a sale, Santee Cooper customers will face higher rates to pay off the debt, which May put at “about $15 billion” including interest. He estimated the rates will rise 12.2 percent to cover the nuclear plant debt. “The longer we push [back] selling Santee Cooper the more rates have risen,” May said.

Ray Pinson, the government liaison for Santee Cooper, said rates are expected to rise an average of 7 percent in the 2021 fiscal year to cover the nuclear plant debt. The utility’s total debt is $7.2 billion and its credit rating from Standard and Poor’s is one step above that of the investor-owned Duke Power, he added.

The four potential buyers, none of whom have been named, say they can reduce rates even while assuming Santee Cooper’s debt. But Pinson and Goldfinch both said that is based on assumptions that were not verified by the consultant, IFC. In comments presented to the legislative review committee this week, the utility said it is unclear whether the projected savings account for the additional cost of infrastructure is required to change the mix of power generation.

“You dig deep into that, you find a lot of that savings was based on importing more power from out of state,” Pinson said. “There are constraints on the transmission system.”

Santee Cooper generates 47 percent of its electricity through coal. Using natural gas would cut costs, but converting existing plants would also come with a cost. “There are no natural gas pipelines to do that,” Pinson said. The closest ones are in the Upstate or in North Carolina and Georgia.

“The irony of the whole thing is that there is a 6- or 8-inch natural gas distribution line that runs right though the middle of the Winyah plant,” Pinson said. Santee Cooper looked at the feasibility of converting the plant, located south of Georgetown, from coal to gas several years ago. “It would suck every bit of gas out of that line just to run that Winyah plant.”

May also said that the lack of renewable energy makes it hard for Santee Cooper to attract new industry. But Pinson pointed out that the utility is mandated by state law to participate in economic development and that its record speaks for itself. As an example, he pointed to the purchase by the utility of 7,000 acres in Berkeley County for a Volvo plant. That was more than the carmaker needed, but Santee Cooper developed the rest of the tract as an industrial park.

“It scares me to think we’re going to lose an economic development engine like Santee Cooper,” Goldfinch said.

May said afterward that he felt most of the audience supported the Club for Growth’s idea of getting the government out of the power business, but he acknowledged that some of those may have been less certain about selling Santee Cooper at the end of the night.

Pinson said he wasn’t able to speak for or against the sale. But he did advocate patience. “No sense in being in a hurry with this thing. I just told you 2021 looks like the closest time for a rate increase, so if we put this thing off another year or two and study it to make sure we get the facts right, it’s going to be well worth it,” he said. “Because once you sell it, you can’t get it back.”

More study is needed, Goldfinch said. A select committee was named in the Senate last week to do that. It includes Sen. Luke Rankin of Myrtle Beach and Sen. Ronnie Sabb of Kingstree.

“There’s a lot of ideology out there, including my own, that says No Public Power. And I get that,” Goldfinch said. “But a lot of this ideology is asking me to do something that’s unreasonable and irresponsible for the state.”