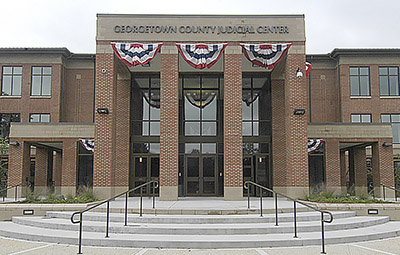 The trial that began this week will resume in March.

A defamation trial involving two members of the Georgetown County Board of Voter Registration and Elections came to a screeching halt on Tuesday, less than a day after the jury was seated and lawyers on both sides gave their opening statements.

Tracy Gibson alleges that Jan Lane called her a “hateful bitch” and “verbally and violently” attacked after a board meeting on Aug. 12, 2020. Gibson filed suit in October 2020 claiming Lane’s behavior slandered her character and reputation and inflicted severe emotional stress and anguish. She is seeking $2 million in damages.

Gibson is still a member of the election board. Lane is not.

The trial began Monday and Gibson was slated to be the first witness to testify on Tuesday morning. Before she was sworn in, Dominic Starr, one of Lane’s attorneys, objected to two points that Gibson’s lawyer, Thomas Tisdale, made in his opening statement.

Tisdale said Gibson would testify that she was fired from her job with the city of Georgetown and had been receiving counseling, and both issues were related to her confrontation with Lane.

Starr said information about both claims was not included in the pre-trial discovery process and was news to the defense team.

Gibson’s testimony about being fired would be hearsay, Starr added, since there was nobody on Tisdale’s witness list to back it up. Starr also said the defense team just received copies of Gibson’s medical bills this week.

“We’re in a position where these things are about to be presented to the jury and we’ve not seen them,” Starr told Circuit Court Judge Steven John.

Tisdale told John he wanted to ask Gibson under oath whether she still worked for the city, and if she didn’t, why not.

John ruled that if Gibson insisted on telling the jury that problems with her job were related to the incident with Lane, he would continue the case to allow both sides time to depose more witnesses.

The trial will resume on March 7, with the same jury.

Both sides have until Tuesday to let each other know about any new witnesses, and until Feb. 18 to take any new depositions.

“I thought it was going to be done today,” Gibson said. “It’s a journey that I’m dealing with every day and it’s hard.”

During his opening statement, Tisdale said the two women had a “hard time getting along” while both were members of the election board and that Lane was “unable to respect” Gibson.

Tisdale questioned whether Gibson was a “hateful bitch.”

Starr said the Aug. 12, 2020, meeting was “heated,” with Gibson and Lane on opposite sides of a debate about changing the board’s bylaws.

Lane’s “hateful bitch” remark was in response to Gibson telling her she needed to “find God” and had too much Botox in her face, Starr added.

Harry Oxner, Lane’s other attorney, filed a motion in November to have the case dismissed. Oxner argued the case lacks merit, and said the exchange between the women was a “private conversation” that occurred after the board meeting had ended. Oxner also said the word “bitch” has been found by courts to not be actionable and argued that no one could prove whether Gibson was hateful.