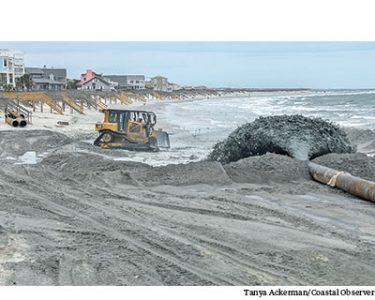 Sand flows onto the beach between Pawleys Pier and First Street.

The last of 1.1 million cubic yards of offshore sand flowed onto the beach at Pawleys Island this week. The $14.3 million renourishment project stopped just north of First Street, drawing criticism from the town’s former mayor.

“Many of us on the north end feel betrayed,” Jimmy Braswell said in an email this week.

He said the current council should honor the commitment made last year to extend the renourishment when it opted to expand the volume of sand from 700,000 cubic yards.

The town is funding the project with $6.1 million collected over 20 years from a local accommodations tax. The town also borrowed $2.5 million. The balance comes from a state grant.

Mayor Brian Henry, who defeated Braswell in the November election, said the town asked the contractor to place sand as far north as possible. The contract that Braswell signed didn’t require work much beyond Pawleys Pier, he added.

“It is unfortunate that you elected to spread disinformation, incite our neighbors, and sow more division,” Henry said in an email. “I believe we should be celebrating the success of the project.”

Marinex Construction began pumping sand onto the south end of the island in October. The town chose to work with the company on a project designed by Coastal Science and Engineering rather than wait for funding through the Army Corps of Engineers, which initially approved work on the south end in 2006.

The cost per cubic yard offered by Marinex was also less than bids the Corps had received for similar projects.

Steven Traynum, the project manager for Coastal Science, said in a memo to the town that the project placed more sand on the narrow south end because it had no dune and a higher erosion rate than other parts of the island. The goal was to create an “ideal profile” along the entire beach.

The work on the north end went beyond the contract amount and represents between $200,000 and $500,000 in value to the town, Traynum said. Marinex went as far as its pump system would allow.

Braswell questioned that, saying there were other ways to move sand. He said the public access at the north end helped qualify the town for state funds. “We have been short-changed,” he said.

In reply to Henry, he added, “as for being divisive for the island, I know that ball remains in your court.”

Traynum also pointed out the sand will continue to move, adding to the beach at either end of the project.

“Historically, the northern end has accreted in recent decades,” he said. “CSE expects this trend to continue.”