Engagement is a priority for administrator finalists – Coastal Observer

Engagement is a priority for administrator finalists 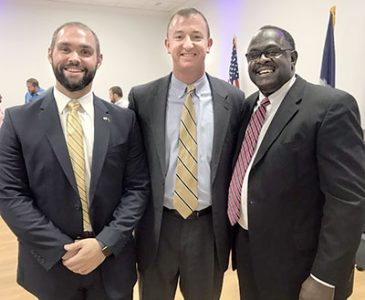 The three finalists for Georgetown County administrator share a vision for public engagement. County Council is scheduled to decide next week whose vision they share.

Ray Funnye, the county’s Public Services director; Brian Tucker, its Economic Development director; and David Garner, director of Abbeville County, were selected from 37 applicants to replace Sel Hemingway, who will retire at the end of the year after 12 years as county administrator.

Funnye started working for the county 27 years ago, after moving home from Atlanta, where he worked in construction management. He became director of Public Works, then Public Services, which includes Public Works and Environmental Services.

“Things are happening in Georgetown County that need to continue,” he said. “People are ready to do great things, and have done great things.”

Funnye believes engagement needs to start with county employees. “Let’s open the door for a candid discussion of what’s going on in Georgetown County,” he said. “Those employees are in the trenches every day. They know where all the landmines are hidden.”

Tucker would like to bring the school district, municipalities and businesses together to create a strategic plan for the county. “I have seven years invested in trying to push us forward,” he said.

He came to the county in 2012 as CEO of the Chamber of Commerce after a career in real estate and banking. He was hired as Economic Development director in 2018.

Abbeville County has conducted two campaigns for a capital projects sales tax like the one that Georgetown County approved in 2014.

County Council has agreed to put another tax on the ballot in 2020.

Both efforts failed in Abbeville, but Garner said the process for the last referendum “gave it absolutely its best chance.” While a committee is required to recommend a list of projects, he created five subcommittees. “They were actually the ones to generate the projects,” he said.

“I like the strategy of engaging all the parts of the public,” Garner said.

He spent 10 years as a paramedic, during which time he earned his undergraduate degree. He worked for the state Emergency Management Division and earned a master’s in public administration. He served as administrator of Calhoun Falls before taking the job with Abbeville County.

“People have a bad taste of local and state government,” Garner said. “They get told ‘no’ so often they almost expect to hear ‘no.’ We look for ways to tell people ‘yes.’”

That doesn’t always happen, but when people don’t get the answer they’re looking for, they still know that an effort was made. “It all goes into how you interact with people,” Garner said.

He is aware that Georgetown County is working to come up with a sustainable budget after two years of deficits that required spending down reserves. Garner said Abbeville was able to take advantage of an exemption to the state law that limits tax increases by local government.

While Abbeville’s population growth is flat, it benefits from economic development in adjacent counties.

“I have a lot of experience that will prove helpful to what Georgetown’s doing now,” Garner said.

With revenue options limited, Tucker said the way forward for Georgetown County requires expanding the tax base beyond Waccamaw Neck. “That is a strategic conversation that needs to happen,” he said.

The capital projects sales tax will help by requiring the county to engage the public to come up with a spending plan.

“What do we want to look like in 10 years?” Tucker asked. “Let’s figure that out and invest in it.”

Funnye also sees the capital projects tax process as a way to talk about growth. “The entire community can be involved in the process,” he said. “We don’t have two Georgetown Counties, we have one. We want to rid ourselves of the us and them.”

The finalists met the public Wednesday at a program at the Howard Center in Georgetown.