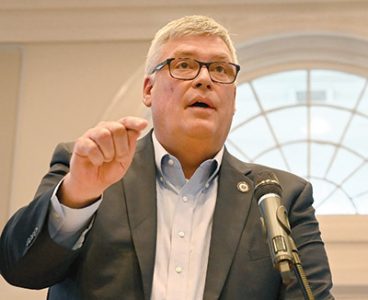 Sheriff Carter Weaver makes his case for more funds at a council workshop.

Law enforcement officers will get the largest share of pay raises included in Georgetown County’s new budget. They are at the top of a three-tiered compensation plan that also raises pay for firefighters and emergency medial workers as well as general government employees.

The budget for the fiscal year that starts July 1 does not address Sheriff Carter Weaver’s request for eight additional patrol deputies.

“It is a good first step by council in their attempt to make an investment in public safety,” Weaver said, but he will continue to make his case for additional staff. “The pay part is promising, but it is only a first step because you have to compare it to the agencies and counties surrounding us.”

Weaver told the council at a budget workshop last month that he was short by an entire shift of 911 dispatchers, by 20 percent at the jail and by 16 percent in law enforcement. Staff was working overtime to maintain service, he said.

Weaver asked for a 10 percent pay increase to help compete with agencies in Horry County. He said that the increase should be for all public safety workers, not just those in his department.

As an elected official, Weaver has the ability to raise issues that hired department heads might not want to talk about in public.

“I take that part of my job just as seriously,” he said. “I will continue to do that. The citizens are going to hear it.”

Under the $2.3 million compensation package approved by County Council in the second reading of the budget this week, trained staff in the sheriff’s office who make up to $40,000 a year will get a 7 percent raise starting in July. That covers about 76 people who work at the jail and the dispatch center.

Staff at the sheriff’s office will also be eligible for up to 3 percent in merit pay increases, a program that County Council restored last year.

Weaver told council in April that only 26 out of 200 employees had the five years of service required to get merit increases.

Karis Langston, the county finance director, said this week that 81 employees are eligible.

Weaver said the 26 he highlighted were in law enforcement rather than the jail or dispatching.

Administrative staff in the sheriff’s office will get a 5 percent raise starting in 2023. That is the same raise and the same timing that will apply to all other general government employees.

In July, those other employees who have more than two years on the job will receive a “service bonus” of $1,820 paid over the 26 pay periods until the end of the year. After that, the 5 percent cost-of-living raise kicks in.

Employees who have less than two years on the job will get a $910 “retention bonus” starting in July and a 5 percent raise in January.

Firefighters and emergency medical workers with more than two years on the job will get a 5 percent raise in July in addition to the $1,820 service bonus. Those with less than two years will get the raise and the retention bonus.

In addition, paramedics will get $200 for every year of service up to $2,000, which will be paid quarterly over the fiscal year.

General government employees who are required to have a commercial driver’s license will get $100 for every year of service up to $1,000. That will also be paid quarterly through the fiscal year. For an employee earning $30,000 a year, that works out to a total increase of 8.5 percent with two years of service and 5.5 percent with less than two years.

The county will fund the compensation package with a combination of property tax increases, funds from the federal American Rescue Plan Act and tapping into reserves.

State law limits the ability of local government to raise property taxes to fund operations by more than the combined rate of the Consumer Price Index and population growth. For Georgetown County, that is a 5.46 percent increase.

The budget approved by the council raises taxes by 3.5 percent, or 1.9 mills for general operations.

It raises the tax levied for debt service by 2 mills in anticipation of borrowing up to $55 million to build a new jail. (The state law doesn’t limit the amount taxes can be raised to pay for debt.)

The jail is something the sheriff’s office also pushed for years, before making a case in public that the current facility is unsafe for both inmates and staff.

He said the situation with the number of patrol deputies is similar.

The cost the new jail was only $25 million when first presented, Weaver said.

“You cannot continue to kick the can down the road,” he said.

His request for eight patrol deputies was part of a plan to add 26 by 2030.

“They need to make a hard decision on the additional deputies,” he said, referring to County Council. “It’s reckless. I was trying to find another word, but it’s reckless.”

The county is also raising its fee for “change of tenant” forms from $25 to $50 and raising the fee it charges the city of Georgetown and the Georgetown County Water and Sewer District to dump sewer sludge in the landfill by $3 a ton.

The county has also discussed a business license fee. That is still under review, Langston said.

She told the council that while property tax collections have increased an average of 1 percent a year over the past decade, since 2017, property taxes have no longer been enough to cover employee compensation. That includes retirement and a health insurance plan that averages $14,000 a year for each of the county’s 620 employees.

“This is just a demonstration of why other revenue sources are so important to us,” Langston said. “We can’t even keep our employees here if we don’t have that other revenue.”