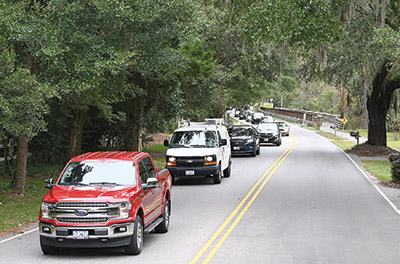 While a Circuit Court judge weighs Georgetown County’s request to dismiss a lawsuit seeking $260 million in refunds from a road user fee, one of his colleagues has already allowed a similar suit to move forward.

He noted that Judge Lawton McIntosh, also from Anderson, had just ruled against Greenville County’s motion to dismiss a suit seeking repayment of its road maintenance and telecommunications fees. There are several other suits pending around the state.

“An issue like this with such an impact on public policy needs to have some uniform adjudication,” Morgan said.

Ross Appel, an attorney for the Georgetown resident who was named as the plaintiff in the suit last fall, disagreed.

“I don’t believe this is the sort of complex legal riddle that needs to be addressed by the Supreme Court,” he said.

The suits followed a Supreme Court ruling in June 2021 that found the Greenville County fees were actually a tax under state law because they failed to benefit “the payer in some way different from the members of the general public not paying the fee.” State law prohibits local governments from adopting taxes other than property taxes without approval of the legislature.

The high court’s ruling only affected the Greenville County fees and didn’t address what to do with the money the county had already collected.

Richard Butts of Georgetown brought the suit on behalf of himself and others. The suit estimated that Georgetown County had collected $26 million in road user fees since 2001. Citing a state law, he sought to collect 10 times that amount as damages.

Morgan told the court last week that there are differences between the Greenville and Georgetown county suits, particularly the fact that no court has ruled that Georgetown County’s fee is illegal.

He argued that the suit should be dismissed because Butts failed to exhaust his administrative remedies provided in the state Revenue Procedures Act. That applies to any claim about illegal or wrongful collection of taxes, which must be filed in the Administrative Law Court.

Morgan said in a filing that the county doesn’t agree that the road user fee is a tax, but pointed out that is Butts’ justification for bringing suit.

Appel argued that the Revenue Procedures Act only applies to claims against the state Department of Revenue and property taxes. That was the argument made in a suit by Jerry Bruce against Greenville County after the county council voted not to return the fees. He also seeks 10 times the amount of improper fees, a total of $300 million.

McIntosh, the judge in the Bruce case, found that the Revenue Procedures Act did not apply. Nor did the act’s prohibition against class action suits.

McIntosh also ruled that the penalty for collecting illegal fees at 10 times the amount collected also applied to the Greenville suit.

Morgan argued that it doesn’t apply in Georgetown County for a different reason and asked the judge to strike it from the complaint if he decided not to dismiss the suit.  It only applies “when the penalty does not exceed $20,” Morgan said.

In addition, he argued that the state Tort Claims Act overrides the other statute.

Appel said the issues in the Greenville and Georgetown County suits were similar.

“Your Honor would be in good company with Judge McIntosh” in denying Georgetown County’s motions, Appel told Maddox.

“I’m not taking judicial notice of that,” Maddox said of his colleague’s ruling.

Both sides offered to prepare orders. Maddox said he wanted time to read through the files.

“It’s going to take a little time to read through it,” he said, but added, “I don’t think it’s that complicated.”

The state legislature is also addressing the issue created by the Supreme Court ruling. A bill up for final approval in the Senate would amend the law on taxes and fees to say the revenue from fees must be used to benefit those who pay them “even if the general public also benefits.”

If the bill receives third reading on a roll call vote this week, it will be taken up in the House.