Highway 17 traffic study up for final round of comments 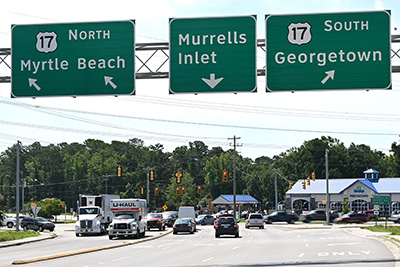 Changes to the intersection of Bypass 17 and Highway 17 are among the recommendations.

Mark Hoeweler expected to get Georgetown County Council’s blessing last month on a $53.3 million list of proposed improvements along Highway 17 on Waccamaw Neck.

That would make the work eligible for a share of federal transportation funds allocated by the Grand Strand Area Transportation Study, for which he is the executive director.

But the county’s approval is on hold while Hoeweler organizes a final public comment session on the proposal. It is scheduled for today at the Murrells Inlet Community Center, the same place that the corridor study was launched in 2019 by the consulting firm AECOM.

The recommendations include $2.5 million worth of projects for completion between now and 2025. Those include closing median cuts and reconfiguring traffic signals.

Reworking the intersection of Bypass 17 and Highway 707 ($4.2 million) leads the list for projects from 2025 through 2035. That is followed by a project to install a raised median between the North Causeway and South Causeway intersections ($4.6 million) and a reconfiguration of the Litchfield Drive and Country Club Drive intersections ($2.4 million).

The corridor study has garnered between 300 and 400 comments, Hoeweler said.

At the next meeting, the consultants will have three stations with video renderings of the key improvements, he said.

“What we’re trying to accomplish here is to give people who haven’t had the opportunity a chance to comment and to give those who have commented a chance to reiterate them,” he said.

County Council Member Steve Goggans has questioned the recommendations in the study.

“Nothing defines our community as significantly as that highway design,” he said. “There’s more than one way to design a highway.”

A 2003 corridor study led to the installation of a raised median in the Pawleys Island business district, something Goggans opposed.

He questions whether the intersection improvements in the AECOM study will accommodate pedestrians and cyclists.

Although AECOM held a virtual meeting in April to review the study, Goggans said the in-person meeting will provide a better opportunity for people to ask questions.

“I think if the community is engaged, they’re going to find some things to comment on of a significant nature,” Goggans said.