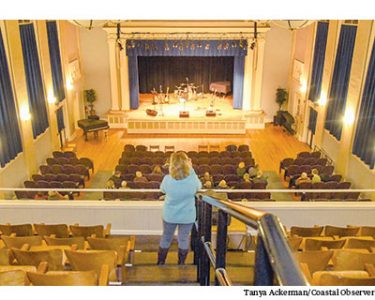 Balcony seats were renovated last year to add to the capacity of Winyah Auditorium.

Originally opened in 1908, the Winyah Indigo School is home to the Winyah Auditorium and the Georgetown School of Arts and Sciences.

“It’s just such a treasure,” said Michelle Lusardi, chairman of the board of directors of the auditorium.

“The whole thing is spectacular,” said Gary Gates, head of the school. “We appreciate having the auditorium here. I hope Georgetown appreciates it as well.”

For the past six years, the school has hosted a troupe from the American Shakespeare Center in Virginia to perform in the auditorium and give hands-on training to students.

“The cast gets to know the kids, and the kids look forward to seeing them every year,” Gates said. “They have fun hitting each other with swords.”

This year’s play is a “A Midsummer Night’s Dream,” a comedy about the course of love that doesn’t run smooth.

“This is a play that everybody likes,” Gates said.

There are two performances: a matinée today for students and an evening show on Saturday that is open to the public.

The matinée sold out in November, Gates said, and ticket sales for the evening performance have surpassed last year’s.

Ticket sales have grown every year, Gates added, with proceeds going into the school’s scholarship fund.

The Winyah Indigo School opened in 1908 as an elementary school. The building was eventually expanded to include students from kindergarten through high school.

A fire in 1981, along with a plan to integrate Winyah and Howard high schools, led to the construction of Georgetown High School. The last graduating class of Winyah High was in 1985.

The building was saved from demolition in 1988 by a group led by Georgetown historian Nell Cribb that got it placed on the National Register of Historic Places.

After a few years as home to some city offices and Coastal Carolina University classes, the building was abandoned.

A group of private citizens bought the whole complex in the early 2000s and, with help from donations and funding from the city and county, raised enough money to renovate the first floor of the auditorium.

“They did a great job,” Lusardi said. “Historically it’s the same colors” as it used to be.

For years after the renovation, the auditorium was only used for rentals. Eventually,  a city-appointed board of directors was disbanded.

A new board was formed in 2010 led by Thom Martin, the music director at Georgetown Presbyterian Church and artistic director of the Indigo Choral Society, and Jerry Crosby.

“They had this vision of creating a performing arts corridor,” Lusardi said. “They wanted to get involved with coordinating things between the Strand Theater and the Cultural Council.”

Martin, a graduate of Winyah High School, died in 2014 and the “wind went out of the sails,” Lusardi said.

Crosby became chairman after Martin’s death and worked hard to keep the doors open, Lusardi said, with mostly rentals and one or two concerts a year.

Lusardi became chairman in 2017 when Crosby retired. Her goal was to continue Martin’s vision.

“I didn’t want to drive to Charleston or Myrtle Beach with that beautiful auditorium right there,” she said.

The board decided to make some infrastructure improvements, including expansion of the stage, with help from Georgetown School students, new stage curtains, and the remodeling of the balcony.  The first floor of the

auditorium only has about 300 seats, and Lusardi said some artists will not play a venue with less than 400 seats.

Last September the balcony was reopened and dedicated to Martin. The board recently approved spending $2,500 to improve the auditorium’s sound system by purchasing new wireless microphones.

“Thom was one of the reasons of moving in here,” Gates said. “Having that balcony is nice.” The school uses the auditorium for its drama classes.

The auditorium has 16 shows scheduled through the end of June, although that number could increase. The board has started getting emails and phone calls from people who will be performing in the area, such as the U.S. Army Band, and want to add shows to their tour schedule.

The goal, Lusardi said, is to have at least two shows per month, except in the summer when free music is abundant in the area.

To grow the business, Lusardi said the auditorium needs to be a “frequent host.” The more shows it hosts, even if they only break even or lose money, the more the auditorium’s name gets out there and the more people will come.

The board has tried different music genres such as jazz, classical, singer/songwriter and gospel. They’re even trying country and bluegrass, and recently had success with tribute shows.

“We’re trying really hard to engage the entire community,” Lusardi said. “There’s something for everybody every once and awhile.”

A tribute to John Denver in September was the most attended concert of the fall schedule, with 237 tickets sold. That was more than double the second most popular show, the Charlestones in December.

Paul Grimshaw’s tribute concert to Van Morrison and James Taylor in May has already sold more than 100 tickets.

“It does tend to draw folks,” Lusardi said, “but I don’t want to do all tribute shows.”

But not all shows are successful. Only 11 tickets were sold for one of the concerts in October.

“I don’t know why it’s so hard to get people in the door,” Lusardi said.

But growth is happening.

“It doesn’t fill the auditorium, but it certainly is building,” Lusardi said.

The auditorium is still rented out for private events such as pageants and recitals.

“Not enough to keep the doors open,” Lusardi said. “It has its roots in wanting the building to be accessible to the community.”

The board used to get $25,000 to $35,000 a year in funding from Georgetown until an embezzlement scandal two years ago involving the auditorium’s director caused the city to stop the funding for a few years and ultimately end it.

“It made it very difficult to keep the doors open but we managed to do it and renovate the balcony at the same time,” Lusardi said. “So there certainly is community support for us.”

The director, who is no longer associated with the auditorium, has paid some of the money the back, but still owes a lot, Lusardi said, adding that board members are now “obsessive-compulsive” about accounting for every single penny received and spent.

To try to replace the city funds, the board came up with a plan earlier this month to find 250 sponsors who will donate $100 each. Auditorium memberships are also available starting at $25.

People who can’t afford to be sponsors or members can volunteer to be ushers or ticket takers and see the shows for free.

The board also decided to join Palmetto Giving Day this year. The annual event is a 24-hour fundraising marathon for nonprofits.

“Our challenge is that there’s such great need in the community and most of the other nonprofits serve that basic need,” Lusardi said. “We’re sort of one level up. We’re quality of life, not basic needs.”

American Shakespeare Center’s production of “A Midsummer Night’s Dream” is Saturday at 7 p.m. Tickets are $35 at thegeorgetownschool.org.