Holiday greens from community garden feed those in need 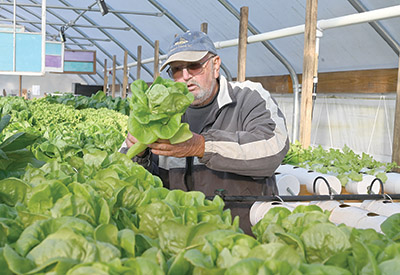 This season’s greenery includes three varieties of lettuce, kale and some herbs. And they will stay green long after the holidays; a gift that keeps on giving.

“We’ve just been very blessed,” said Brewster Buck, who chairs the board of Carolina Human Reinvestment. The nonprofit planted a community garden in Pawleys Island in May 2020. At Thanksgiving, it provided over 300 heads of lettuce for a food distribution in the Sampit area of Georgetown County.

One reason for the growth spurt was the donation earlier this year of 4-inch PVC pipe.

“Six months ago, I knew nothing about hydroponics except how to spell it,” said John Flagg, a volunteer at the garden. Now, he is watching over rows of plants that sit in holes cut in the pipe on a series of wooden tables. Their roots are fed by nutrients in water that is pumped from a 55-gallon barrel through a series of pipes inside the garden’s greenhouse.

There are also raised beds outside the greenhouse that have supplied tomatoes, okra, peppers and other vegetables over the growing season.  But the hydroponics have taken the garden to a new level because it uses space more efficiently and reduces weather impacts. It’s part of the exponential growth that began when the first stakes were driven for the garden on Petigru Drive.

Carolina Human Reinvestment is an education and mentoring program for at-risk youth. Giany Guedjo, the director of the nonprofit, started a couple of small gardens for the kids to work four years ago, but his goal was to create a community garden and to see that the vegetables reached people in need.

“That’s it in a nutshell,” Buck said. “We’re just trying to show love; with food, with education, with a pat on the back.”

The goal for the garden is to harvest vegetables every two weeks, Flagg said.

Carolina Human Reinvestment is a partner with Food Share, a Columbia-based nonprofit that provides fresh produce at reduced cost to people in need. People can buy food boxes every other week for cash or using their card from the federal Supplemental Nutrition Assistance Program.

To meet the demand, the community garden has continued to refine its process. There is now a nursery for the seedlings, which then go into cups that fit into the PVC pipes after about two weeks. Their first stop is a set of pipes that are watered by hand.

“The babies need to be treated gently,” Flagg said. “After a month, they’ve got a pretty good root system.”

The nursery also frees up space in the other pipes.

At maturity, the plants use about 40 gallons of water a day. The volunteers replenish the barrel of nutrient water that recycles through the system.

The land and the facilities have all been donated. Support continues to grow as people become aware of the garden, Flagg said.

Carolina Human Reinvestment is now considering a separate garden that would just provide produce for the Food Share program, he said.

Since the first donation of pipe from a Georgetown man, the community garden has received donations from Thomas Supply in Murrells Inlet.

“With the amount of pipe we’ve got, there’s no limit,” Flagg said.