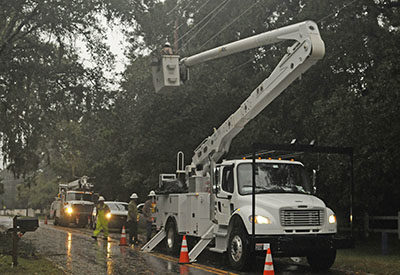 State legislators say they will focus on ratepayers rather than ideology when they consider proposals to sell Santee Cooper, the state-owned electric utility. A report on four offers from private utilities is expected to emerge next month from a committee reviewing the sale.

Santee Cooper provides retail power to customers in Georgetown, Horry and Berkeley counties, but it provides wholesale power to municipalities and co-ops around the state. It has about $8 billion in debt, half of which comes from a partnership with SCE&G in the failed expansion of the V.C. Summer nuclear plant.

Tom Swatzel, a former Georgetown County Council member and a political consultant, has been urging property owners associations to contact local lawmakers to support the sale of Santee Cooper. He called the utility’s debt “a ticking time bomb” for ratepayers. An investor-owned utility would buy up the debt, provide power more economically and retain jobs for current Santee Cooper employees. Any rate increases would require approval from the state Public Service Commission.

“I love Tom Swatzel. He’s a great guy,” state Sen. Stephen Goldfinch said. “He’s on the wrong side of this.”

A company whose first obligation is to its shareholders won’t have the incentive to maintain low rates, particularly if they are buying Santee Cooper’s debt, he said.

“You can’t tell me they’re not going to come in here and not raise rates,” Goldfinch said. “My rateholders, people who pay rates to Santee Cooper, don’t want to see their rates go up.”

Santee Cooper has said its rates will rise 7 percent at the most by 2025, Goldfinch said.

State Rep. Lee Hewitt said he has already heard from one POA in support of the sale. “It’s easy to say ‘sell it,’ but you don’t know the offers or the terms,” he said.

Hewitt and Goldfinch understand there is a philosophical reasons to support the sale. They don’t think the state should be in the electricity business. “The reason it got in the power business has gone away,” Hewitt said. “How do we get out of it so that it’s in the best interest of the people Santee Cooper services?”

“A proposal to build Santee Cooper today, I’d vote against that,” Goldfinch said. He would also oppose creation of electric cooperatives.

But “at the end of the day, people vote with their pocketbooks,” he added.

Goldfinch said Santee Cooper “has a mandate not to make money” that an investor-owned utility won’t have. Although the state-owned utility doesn’t pay property taxes, it puts $20 million a year into the state budget and funds economic development programs.

“It has a couple of thousand employees, the lowest rates in the state and great service,” Hewitt said. “But they do have huge debt because of the nuclear fiasco.”

The state has guaranteed that debt, he added. “There will be a lot of lobbying going on.”

Goldfinch said he is willing to consider any ideas that come out of the ad hoc committee’s report, but unless something changes dramatically “I will be the last person to vote for any change,” even if that means a filibuster.