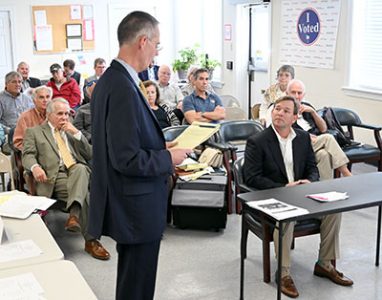 Brian Henry, right, had his vote counted after a hearing on challenged ballots.

Pawleys Island Mayor Jimmy Braswell and Josh Ricker, a candidate for Town Council, filed protests to this week’s election hours after the Georgetown County Board of Voter Registration and Elections certified the results that showed them losing their races. The elections board on Thursday denied 20 challenges to votes cast Tuesday and on absentee ballots. The number was unprecedented, election officials said.

The challenged ballots put Brian Henry ahead of Braswell 78-58 in the mayor’s race. Henry’s vote was among six challenged on Election Day at the precinct in Pawleys Island Community Church.

The challenged ballots also boosted Council Member Guerry Green over Ricker in the five-way race for four council seats. Green picked up 19 votes among the 20 challenged ballots. Ricker got none. Green’s vote was also among those challenged along with those of his wife and two of their children. Henry’s two daughters had their votes challenged, too.

In the council race, Ashley Carter led the field with 126 votes, followed by Sarah Zimmerman (112), Rocky Holliday (92) and Ricker (66). Holliday got 20 votes from the 20 challenged ballots. Carter got 18, Zimmerman got 13, and Leda McIntyre Hall got 1. Hall dropped out of the race last month, but remained on the ballot. She got 16 votes.

The elections board, formally convened as the Board of Canvassers, voted 7-0 to allow all the challenged votes to count. There were 29 challenges in total, all from Braswell’s poll watchers, but eight were opened and counted on election night by mistake. Another was challenged after the absentee ballots had been processed and was also included in the election night tally.

Most of the 29 challenged voters registered to vote in the town in the weeks ahead of the October deadline for the November election. An exception was Harry Oxner, who registered in 2003.

Stephen Ishmael, a poll watcher for Braswell, told the elections board that property, tax and business records give Oxner’s address a house on the mainland. Billy Jenkinson, the attorney who represented the poll watchers, Braswell and Ricker, provided the board with copies.

Oxner produced his voter registration card. “It’s torn and tattered,” he said. It listed his address as 350 Myrtle Ave.

He told the board that the Pawleys house is one of several he owns. “And we sleep in all of them,” Oxner said.

Jenkinson pointed out that it is a vacation rental property owned by a limited liability company. Oxner is a resident on the mainland “and not the family beach house,” he said.

“Can a voter live in a residence he doesn’t own,” board member Billy Altman asked rhetorically. “You’re making a case it can’t be his residence because somebody else owns it.”

That set the tone of all the challenges that followed. In most cases, it was the last-minute registration that raised concerns, Glenn Kornahrens, the poll watcher who challenged most of the ballots, said. That led him to review property records, except in the case of voting-age children who listed their parents’ house on the island as their residence.

Altman noted that there was no date on the property records to show if the information had changed along with voter’s residency. And even if it had not changed, he said, there is no requirement that a voter change all his other residency information at the same time he changes his voter registration.

Voters swear an oath on the penalty of perjury that the information about residency on the voter registration is correct. “All we have to go on is the voter’s oath,” Altman said.

“We need to hear something really solid before we disenfranchise a voter,” Altman said. “We place great stock in the records we have.”

Dean Smith, the board chairman, said, “We take the right to vote very seriously.”

The protests filed by Braswell and Ricker say that the elections board failed to follow the law when considering the ballot challenges, ignoring items listed in the law that can be used to determine a voter’s intent when declaring his residence for voting purposes.

They also say the board failed to consider that Henry and Green are not qualified voters in the town and therefore cannot be candidates for office. Henry claims the Sea View Inn, which he and his wife own, as his residence. Green claims a house that is also a vacation rental property.

“The evidence is people pay him $5,000 a week to live in that house. That ain’t his house,” Jenkinson said of Green.

“How much do you have to live in a house,” Altman asked.

“If you ignore the law, I guess you can say he lives there,” Jenkinson said.

The Board of Voter Registration and Elections will meet Tuesday at 10 a.m. in County Council chambers to hear the protests. The board’s decision can be appealed to Circuit Court.

A Town Council meeting scheduled for Monday, where the mayor and council were scheduled to be sworn in for new terms, was cancelled.