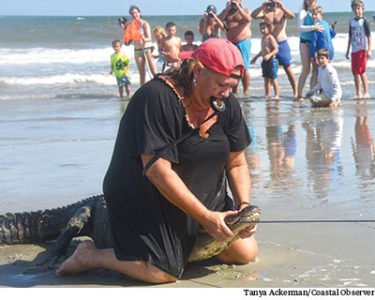 Rachel Lankford secures an alligator on the beach in 2017.

They are fond of soap as well as candy bars. They are also looking for water and a place to call home.

Pawleys Island has an issue. “We can’t even say it out loud,” said Rachel Lankford, who works for Clark’s Termite and Pest Control.

Now that Labor Day has passed, and with it the end of the tourist season, the word is out. Rats.

“I’ve had some people deny the existence of rats on Pawleys Island,” Lankford told the Pawleys Island Civic Association at its annual meeting, mimicking one of the complaints she has heard: “It’s not good for business.”

Norway rats have been turning up in island homes this summer. She isn’t sure why, but Mayor Jimmy Braswell said he believes it is due to the reduced number of feral cats on the island.

Lankford was told by former Mayor Bill Otis that the cats were embraced due to an outbreak of rats about 30 years ago. The town set up a trap, neuter and release program, funded in part by a property owner who was concerned about the impact of feral cats on the songbird population.

More recently, the town had a rash of break-ins traced to raccoons.

There are still a few feral cat colonies on the north end of the island, Lankford said. She hasn’t had any calls for rats in that area, she said.

Lankford, who is best known for wrangling nuisance alligators that stray onto the beach, said she had about 30 calls for rats this summer. About half were for actual sightings. Others were preventative calls.

“We kind of feel like we have things under control right now. We haven’t had one in a house in about two weeks,” she said. “It isn’t fun to explain to a vacationer why a whole peach is gone.”

She doesn’t like to use poison out of concern for a secondary impact on other animals that eat the bait or the poisoned rats. She prefers traps and a change in lifestyle. For property owners, that means sealing up gaps in buildings that let the rats squeeze through and making sure that their outdoor showers don’t leak. With saltwater on both sides, the island rats are looking for fresh water, Lankford said.

People who feed the island’s feral cats should cut back. “Maybe you don’t feed them as much. They’ve grown lazy,” Lankford said.

Norway rats are not native to the Americas, as the name implies, but scientists have traced their origins on the continent to ships that arrived in the 18th century. The island rats live in the dunes and the marsh. “Paddleboarders have seen them in the creek,” Lankford said.

They resemble a large field mouse. The largest one Lankford trapped was 17 inches from head to tail. One woman called her to get help with a squirrel. The woman told Lankford that the squirrel had something wrong with it and had lost all the fur from its tail.

The summer crop of rats isn’t limited to Pawleys Island. She has had calls from other beachfront areas, too.

“I have seen every single sunrise. That has been a blessing to me,” she said. The rats are most active after dark.

With the tourist season at an end, Lankford said absentee owners need to make sure that their houses are secure from rats over the winter. “Let’s be proactive about this rat thing,” she said. “We don’t need an epidemic.”

Rats weren’t the only species that came to Pawleys Island in large numbers this summer. There were 39 sea turtle nests, a record for the turtle monitoring program that is now in its 30th year.

Correction: This article was updated from the print version, which said Lankford is the owner of Carolina Exterminators. She started working for Clark’s in August.