On track to build up beach, town also needs to build revenue 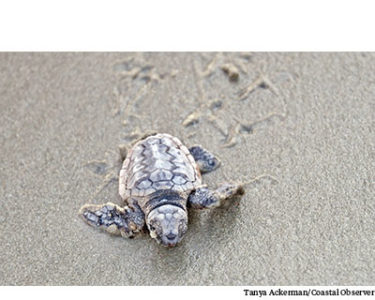 A sea turtle hatchling heads to the ocean on the south end of Pawleys Island. Renourishment will begin after all 37 nests on the island have hatched.

With the town of Pawleys Island on track to start a beach renourishment project in October, the need to secure future funding to maintain the beach is more important than ever, according to the town administrator.

But the committee that reviewed a variety of options for raising money voted itself out of business last week without making a recommendation to Town Council. It struck down a series of measures including a business license, parking fees and additional beach access that could attract grant funds.

Last week, Town Council agreed to work with a contractor to complete a project it developed in 2018 to renourish 2.4 miles of beach with offshore sand. The town spent the last year working with the Army Corps of Engineers on the project, expecting that federal funds would pay most of the cost of the work on the island’s narrow south end.

The council dropped the partnership with the Corps out of concern that it wouldn’t fully fund the project or, if it did, that work would be delayed beyond another hurricane season.

The current project will place 850,000 cubic yards of sand on the beach at a cost of $12.1 million. The town expects to get

Town Council could also increase the volume of sand up to 1.1 million cubic yards, which would require the town to increase its borrowing.

By dropping the Corps, the town loses federal funding for the current project and for maintenance of the south end beach over the next 50 years.

The need to identify future sources of funding “is more important now than it was before,” Administrator Ryan Fabbri said. “You can’t do $14 million projects on your own.”

The finance committee was formed to look at ways to fund the 50 percent share of south end renourishment that the town would have been responsible for under an agreement with the Corps. Local funds would also let the town carry the renourishment to sections where the lack of public access limits the availability of state and federal funds.

The most contentious option was creating an additional beach access on a vacant lot near the South Causeway. Property owners in the area told the committee the plan would reduce their property values and said they would challenge the plan in court.

The committee voted against it, but Josh Ricker, who chaired the panel, sought to include it as an option for the town to consider.

Instead, the committee adopted Oxner’s motion to disband until recalled by the council.

The council hired a law firm to help get a bill through the state legislature that would let the town implement a property tax for beach renourishment. It currently has no municipal property tax.

While that’s in progress, any other revenue ideas would be “redundant,” former Mayor Bill Otis said.

“It’s not like these are dead issues,” he said. “To do anything other than plan for another 10 years is irresponsible.”

He favors a business license, which would be paid by people who rent their houses. “If you don’t have a healthy beach, no one’s renting your house,” Fabbri said.