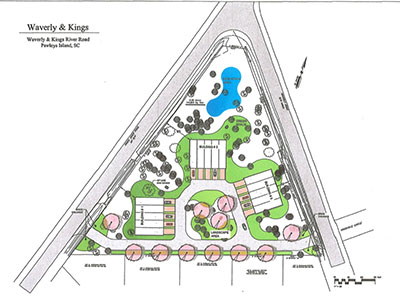 The original plan for the site showed 15 units. One was removed this week.

Georgetown County planning staff are recommending approval of a request to rezone property at Waverly and Kings River roads for a multi-family development. The proposed change from six half-acre lots to 14 townhouses will create more green space than a typical single-family development, according to the recommendation.

The project will keep 83 trees on the 3.3-acre site. One townhouse was cut from the original plan. That will save one of the largest trees on the site, according to county planners.

But opponents to the rezoning request that will allow the townhouses instead of six single-family homes allowed by the current zoning say they are focused on the density, not the trees.

The owner, Calvin Gilmore, who lives on the opposite corner, plans to sell the property to investors who want to develop the townhouses. Gilmore is asking the county to change the zoning to a “flexible design district” that will allow the multi-family units.

The number of units on the site will be limited by deed restrictions, said Bruce Watts, who is representing Gilmore and who created the plan. The planning staff recommend that be made a condition of approval.

The staff also recommend that the three buildings – two with five units, one with four – have at least a 4/12 roof pitch and use materials that meet the county’s design standards for commercial buildings in the Highway 17 corridor. They recommend that developers grant an easement for an extension of the Bike the Neck route along Kings River Road.

The citizens group Keep It Green, which opposed development of the former tennis courts at Litchfield Racquet Club last year, says it opposes the increase in density.

“In support of our mission statement to protect and preserve the  land, quality of life, recreational space and natural character of the Neck for present and future generations, we are opposed to any action (zoning or ordinance changes) that would increase density in the lower Neck beyond what is already planned and approved,” the group said in a statement this week.

Mary Beth Klein, a leader of the group, pointed out that the limit on density was adopted by Georgetown County Council as part of the Future Land-Use Plan adopted in 2008.

She dismissed the claim that multi-family project will save more trees on the property as “a marketing ploy.”

Retaining the current density would save even more trees, Klein said.

“We’re not opposed to development,” she added. “We just want to make sure we’re smart about how we do things.”

Watts met with county planning staff this week and agreed to cut one unit from the original plan for 15 townhouses.

“The biggest tree on the lot was going to have to come out,” Boyd Johnson, the county planning director, said. “He was able to slide the units around and save that tree.”

The staff recommendation points out that the “flexible design district” zoning is intended to allow projects that “create more desirable environments.” It cites the ordinance, which states “higher densities shall only be allowed when strong evidence is present that affordable housing will be promoted, useable open space will be increased or the natural environment will be enhanced.”

The Planning Commission will hold a public hearing on the rezoning Aug. 20 at 5:30 p.m. at the Howard Auditorium in Georgetown.

The commission will send a recommendation to County Council, which has the final say.