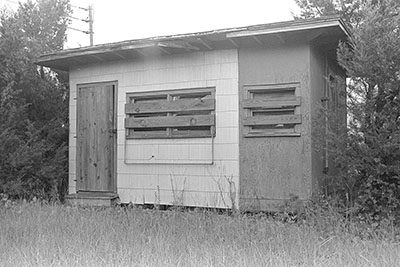 The rental building, seen in 1987, that was converted into the first Town Hall the following year.

Ice cream will have to wait. The old Town Hall at Pawleys Island will be used as a place for history and environmental education under a plan that an ad hoc committee hopes to complete this spring.

“That’s sort of the overall direction we needed to go to in Phase I,” George Raftelis, who chairs the committee, said. “This embraces something that would be generally accepted.”

The six-member group began meeting last month to find a use for the building on the creek side of Myrtle Avenue that flooded during Hurricane Matthew in 2016. The town moved into temporary quarters while a new Town Hall was built down the street. The new facility opened in January.

Initial discussions included some sort of basic retail operation that could help cover the operating costs of a museum. Committee members interviewed island residents and property owners and found that history and education were prized more than selling food and drink.

“That was a breaking point for several people I talked to,” Betsy Altman said.

“That’s why we don’t even want to touch it,” Raftelis said.

He wants to present a recommendation to Town Council this spring and hopes that renovations and some exhibits can be in place by the end of summer.

The town is limited in what it can do to renovate the structure, which has about 600 square feet, because work that exceeds 50 percent of its value will trigger compliance with federal flood regulations. Among the reasons the Town Council decided to build a new facility was its reluctance to grant a waiver to itself for rebuilding without elevating the old facility.

The operating cost is estimated at $5,000 to $8,000, some of which is already in the town’s budget. Both capital and operating costs could be covered by donations, Raftelis said, noting that the town is now trying to come up with a plan to fund long-term beach renourishment. One facet of that finance plan was revenue from a possible retail operation at the  old Town Hall, but the committee working on funding issues deferred that until the building committee completed its work.

“The biggest obstacle at this time is just not knowing what the impacts would be,” Raftelis said, referring to a retail operation. “We need to walk before we run.”

The committee will seek input from architects about the interior. It doesn’t envision doing much to the exterior, but would like to improve the landscaping. “We really need to start with a clean slate,” said Toni Ricker, who came up with a landscape plan.

Joe Miller, a committee member who works in real estate development, had two colleague look at the building. They agreed it would be hard to preserve the building and keep the cost below the threshold for compliance with flood regulations. “Anything that can get wet and mold is going to be a problem,” he said.

But Miller told the committee this week that one consultant suggested removing the windows and the wall facing the creek. “You kind of treat it like a dock house more than an enclosed building,” Miller said. That would have to be done while also preserving the familiar façade of the building that was converted from a beach rental office to the Town Hall in 1988, he said.

Most of the displays envisioned for the building would be photos and documents. Removing a wall would cut down on display space, Marvin Thomas said. But he added, “the more I think about it, the more I like it.”

That is an alternative to keep in mind for a future phase, Raftelis said.

In the meantime, the committee agreed to solicit items for display from property owners. (It’s likely the displays would be copies rather than originals.) It will also get input from the Chamber of Commerce, the Baruch Foundation, the S.C. United Turtle Enthusiasts and other organizations on history and nature displays.

The biggest challenge, Thomas said, will be consolidating the island’s history to fit the space. “You’ve got 500 square feet and three walls,” he said.