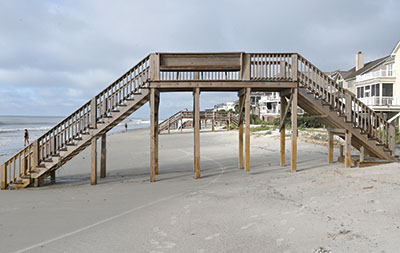 The project includes building a dune under walkways that now cross the eroded beach.

Property owners at the southern end of Litchfield Beach will return to the sea in search of sand for a renourishment project, abandoning plans to haul inland sand by truck.

State and federal agencies are taking public comments on the third version of a permit application by the Peninsula Property Owners Association to place up to 400,000 cubic yards of sand on the beach. The first two plans met with opposition from property owners in the Inlet Point community and Litchfield Beach.

The 33 lots at the Peninsula are part of the gated Inlet Point development, but also have their own association, which will fund the renourishment.

“We want to appease as many people as we can,” said Steven Traynum, project manager for Coastal Science and Engineering, which designed the project. “With just the Peninsula, they would be paying for the whole thing.”

The purpose of the project is to prevent storm damage. It will also allow the property owners to establish the state’s jurisdiction at the base of the dune that will be created. The state is due to revise its jurisdictional lines in 2022. Under the current conditions, Traynum said those lines would likely fall under or behind the current houses.

The POA first applied in April for permits from the state Department of Health and Environmental Control and the Army Corps of Engineers to place offshore sand on nearly a mile of beach. That was opposed by property owners in Inlet Point and Inlet Point South who said they didn’t want to pay hundreds of thousands of dollars in assessments for a project that would primarily benefit owners in the Peninsula, which was developed on property in a federally-protected coastal barrier.

In July, the Peninsula POA changed its permit application to allow up to 400,000 cubic yards of sand to be trucked to the beach over two or three years. That was estimated to cost about $8 million and would exclude the beach in front of Inlet Point South.

The revised permit drew hundreds of letters in opposition, many focused on the impact of the truck traffic on the roads and quality of life in the beachfront community. The work was estimated to require between 100 and 150 truck trips a day over three months.

While Traynum said the state Department of Transportation said the roads and the bridge on  Litchfield Drive could handle the traffic, Coastal Science was concerned that the permit would be appealed.

The latest project will place offshore sand on the 2,700 feet of beachfront at the Peninsula. The POA is asking for a 10-year permit to allow for additional offshore sand to be used to repair storm damage.

In order to reduce the cost of the project, the POA wants to be able to dredge in the spring and summer. Dredging is usually restricted to avoid sea turtle nesting season, which runs from May through October.

The wider dredging window means more contractors will be available to bid on the project and there is less likelihood work will be delayed by bad weather, Traynum said.

He doesn’t expect the project will impact the sea turtles.

“That area of the beach doesn’t get a lot of turtle activity anyway,” Traynum said. “In its current condition, it has zero nesting habitat.”

Since the dredging will take place around the clock for six to eight weeks, the main concern will be keeping lights from the project from disrupting turtles on adjacent beaches, he said.

In addition to creating a beach that will have 200 feet of dry sand at high tide, the project proposes to create a dune up to 15 feet high in front of the houses, according to the permit application.

“I’m not sure we will go that high,” Traynum said. “We wanted to get to the height of the walkovers.”

Two other concerns raised about the first two versions of the project were the quality of the sand and the potential for the new sand to wash into Midway Inlet and Clubhouse Creek.

“That material looks a lot more like the native sand than was put over on Pawleys,” he said.

The evidence from the Pawleys Island renourishment also shows that the additional sand won’t end up in the creek at Litchfield, Traynum said.

At the south end of Pawleys, the beach grew in front of the spit during the six months after sand was added to the north. Even with Hurricane Isaias in August, there was no sign that the sand washed over the spit, he said.

A concern shared by property owners at Pawleys Island and Litchfield is the silt clogging the creeks. Coastal Science looked at the sand in Clubhouse Creek as part of the Peninsula project.

Even if permits could be obtained, the creek contains only about 80,000 cubic yards of sand, Traynum said.

Comments on the revised permit application can be made online at epermweb.dhec.sc.gov.