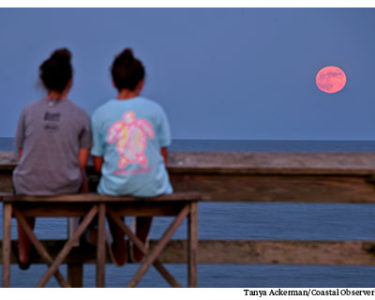 The full moon rises Tuesday over Pawleys Pier, the 50th anniversary of the launch of the Apollo 11 mission to the moon.

Bill and Joe Chandler were working for NASA in 1961 when President John F. Kennedy told Congress the United States should work toward landing a man on the moon, and returning him safely to Earth, before the end of the 1960s.

“From the get-go we knew it was a tremendous challenge. We didn’t dwell on whether we could do it,” Bill said. “It was an ultimate challenge for the country. The country needed a challenge.”

Bill helped develop the  technology that held oxygen and the fuel cells that powered the spaceships. Joe designed the seismometer that measured moonquakes. The brothers were two of the approximately 400,000 people who worked for the space program in the 1960s.

“We were moving forward, we couldn’t sit back and be still,” Bill said. “It never slowed down. We were thinking about the problems in front of us.”

Bill Judd of Pawleys Island was at Kennedy Space Center in Florida when Apollo 11 launched on July 16, 1969, as the fifth manned mission of the Apollo program. Judd was working for Pratt & Whitney, a NASA subcontractor, and was invited by astronaut Deke Slayton to watch the launch in a VIP room with Vice President Spiro Agnew and King Hussein of Jordan.

“To me, there was no one that didn’t want to get to the moon,” Judd said. “In the whole country, everybody wanted to work together no matter how important or how little importance they had.”

Judd always believed NASA would figure out how to get to the moon, but he feared they wouldn’t find a way to get back.

“All those multi-million rockets we have to send them to the moon, there isn’t one to come back,” Judd said.

Three days after Apollo 11 lifted off, Armstrong, Aldrin and Michael Collins, command module pilot, reached lunar orbit. Six-and-a-half hours after the Eagle landed on the moon, on July 20, Armstrong became the first person to walk on the moon.

While watching Armstrong on a television at his house, Judd was thinking “I hope he comes back.”

“I still had that fear,” Judd said. “I always feared about getting off the launch pad, and once we got there, how do we get back.”

“They all had different personalities, they really did,” Judd said. “I just say I was one of the lucky few who knew all these people.”

He was already there in September 1961 when NASA announced that it was going to build its space center in the city. When Boeing opened a facility in New Orleans, Judd helped set up the plant that made the rings for the Saturn V rockets.

Chandler worked on all of NASA’s spacecraft, from Mercury to the space shuttle. He was even in on the planning of the International Space Station.

“We were thinking, what could we do with space now that it had been opened up,” Chandler said.

“That was your only opportunity to experience hands-on stuff,” said Scott Streiffert, a retired teacher who worked with WASA when his sons were at the school.

Now students design rockets and rocket parts on computers and build them in engineering classes.

“You need to get them interested when they are young,” said Alan Pritchard, WASA advisor.

Streiffert and Pritchard celebrated the anniversary of the Apollo 11 launch by shooting off five rockets behind the school on Tuesday. It was part of a global effort sponsored by Space Camp in Alabama. Pritchard said all those participating were told to launch one rocket at exactly 9:32 a.m. to try and set a Guinness World Record.

Pritchard is the school’s media specialist, but helps teach rocketry in science classes.

“He’s taken some of the things we’ve done at WASA into science classes, where we’ve been able to shoot a rocket or work with kites or understand flight within the realm of their everyday classroom work,” Streiffert said. “A kid might not want to stay after school and do it, but they still get that exposure because the science teacher has invited [Pritchard] in to actually teach a lesson.”

Streiffert said space travel is still relevant today because the whole world is interconnected through technology.

Streiffert said as far as more space exploration, he would support it if someone could give him a practical explanation as to why we need it. Although he also believes space travel could spark more kids’ interest in engineering.

“Maybe going to Mars is the angle that captures kids’ attention, to get them interested in engineering and a lot of the STEM fields,” he said.

Dupree Eubanks, 9, gets help from Ben Tester setting up his rocket for launch during Space Camp.

Connie Richardson Smith of Sioux City, Iowa, has traveled to Pawleys Island every summer for the past 29 years to teach a space camp with her sister, Mary Tester. In 1989, she spent three weeks participating in a seminar for teachers at the Johnson Space Center, learning from some of the engineers who had worked in the space program in the 1960s. She said the most important thing to the hundreds of thousands of people who worked in the space program was working together, focused on one goal.

“It wasn’t about how much money these guys made, it was about getting to the moon,” Smith said.

“We don’t have any heroes anymore, and as far as I’m concerned, these astronauts are heroes,” she said. “That’s one of the reasons that I keep teaching it. I really believe in the program.”

Smith is dismayed at how little government support there is for the space program considering all the medical and technological advances that have come from it.

“We wouldn’t have the heart monitor, look at the lives that saves,” Smith said. “People say, ‘people are dying and we have all this poverty. Why support the space program?’ It’s because they don’t understand.”

Judd misses that time when Americans united to work toward one cause, like putting a man on the moon.

“I really wish there was something today that would bring this country back together,” he added.

Chandler said the United States needs to think seriously about the future of space exploration.

“We don’t want to stop and drop it and not do anything,” he said. “There’s an opportunity and a challenge. I think we ought to step up and face it. … I don’t see a reason not to do it other than money.”

Judd moved to Pawleys Island in 2002. He still looks to the stars.

“At 5:16 the other morning I was out on the golf course watching the [International] Space Station go by,” Judd said. “I hope on July 29 I have a schedule of when the space station goes by and I’ll invite people to go out and watch it.”