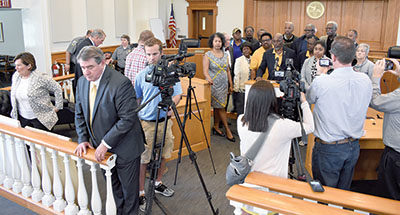 Austin Beard, left, leaves the courtroom while Marvin Neal addresses the press from the podium after last week’s hearing.

A Georgetown County Council member who was poised to become chairman less than three months ago is now deciding whether he should resign following a ruling last week that he does not live in the district he represents.

The county Board of Voter Registration and Elections voted unanimously that Austin Beard is not properly registered to vote. State law requires that officeholders in single-member districts be “electors” in their district and the law defines electors as residents.

Beard can appeal the decision to Circuit Court. “I’m sure there will be calls for my immediate resignation and I need to get clarification. It’s my understanding that the action this board took today just basically invalidates my registration in that precinct. I don’t think they have the authority to remove anyone from council,” Beard said following the 8-0 vote.

Resignation is also an option. “I do not want friends and family or other members of council to be subjected to the kind of, I consider, harassment we’ve gone through these last two months,” Beard said.

The local chapter of the NAACP filed a challenge to Beard’s claim of residency at 510 N. Magnolia Ave. in Andrews. At a hearing last week, Beard testified that he rented the house for a one-time payment of $150, but never lived there. He said health problems led him to live in Georgetown at the home of his current wife. The couple got married last year.

“I’ve not spent a night at the Magnolia address,” Beard testified. He said he listed it on his voter registration before filing in the 2016 election. “There were some issues as far as repairs that needed to be done, cleaning and so forth, and prior to completing all that was when some of my medical problems began and required that I seek assistance for rehab,” Beard said.

He also told the board about a series of illnesses that began in 2014 and continue to require treatment.

State law also defines a person’s residence as his domicile, “a person’s fixed home where he has an intention of returning when he is absent.”

“The law to be applied by the board to this situation has been clearly answered by Mr. Beard’s own testimony,” Thomas Tisdale, attorney for the NAACP, said. “And he said he has never lived, never lived at North Magnolia Avenue. If he has never lived there, he can’t possibly be domiciled there and in fact it’s not even his residence.”

David Watson, the attorney who represented Beard, urged the elections board to look at the second part of the definition: intent to return.

“I heard the Magnolia place could not be his residence. That’s not supported by South Carolina law because once a place becomes a residence, it remains one,” Watson said.

The law lists 11 factors for guidance on a person’s intent, but notes they are not an exclusive list. Watson focused on the last one.

“A person can leave what has been designated as his domicile, wherever it is,” for medical care, he said. “There is not a time constraint on that.”

Billy Altman, who chairs the election commission, questioned Beard about the 11 criteria. Beard said his driver’s license and car registration also list the North Magnolia address, but he has not made any other rent payments nor does he have any other connections to the house. “I pay taxes on that vehicle in the town of Andrews,” Beard added.

The board needed little time to deliberate, but board member Dean Smith asked Altman to restate the question.

Referring to 510 N. Magnolia Ave., Altman said, “Is that his current and valid address?”

Earlier, Tisdale had stated the question as did Beard live there in 2016, when he was last elected. Altman corrected him, emphasizing the issue is whether Beard resides there “at this time.”

The distinction is important because the state law also states “a council member will be deemed a resident of the district he represents as long as he resides in any part of the district as constituted at the time of the election.”

“There’s overwhelming evidence, in my opinion, that Mr. Beard has never lived at 510 N. Magnolia Ave., doesn’t live there now and that he is not properly registered in Georgetown County,” Altman said.

A ruling that Beard “is not properly registered to vote” was sent to the state Election Commission. Beard has 10 days to file notice of an appeal.

Marvin Neal, president of the NAACP chapter, said he is waiting to see whether Beard attends next week’s County Council meeting. The group is prepared to go to court to have Beard removed. “We’ll see what happens,” he said.

Following last week’s vote, he called on Beard to resign so a special election can be held. “Never doubt the deliberate, determined actions of a small group of citizens to affect change,” Neal said. “Georgetown County Council is not a private club serving a select few.”

The state attorney general’s office has maintained in a series of opinions, which do not have the force of law, that representatives who are not qualified to serve by residency are deemed to vacate their seats. Those opinions also cite a state Supreme Court ruling that the officeholder may continue to serve until replaced.

“I know the other side is calling for my hide. I understand that,” Beard said. “I’m not just snubbing my nose at them.”

But he added, “at the same time, I want adequate time to make an informed decision.”