Santee Cooper agrees to talks with HOAs on streetlights 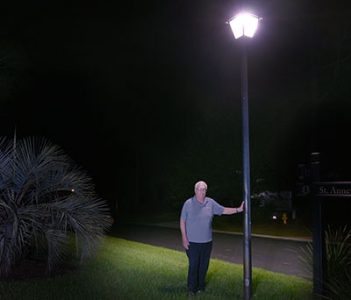 Doug Decker created a formula for HOAs to calculate the over-payments.

Communities that pay a monthly fee for street lights could see a savings if Santee Cooper agrees to let them buy the light fixtures and poles. Officials at the state-owned utility have told property owners they are willing to talk about a change in policy since the Georgetown County Council chairman asked the state attorney general for an opinion on the issue.

“Most HOAs have looked at this line item and  thrown up their hands,” said Doug Decker, a resident of Heritage Plantation, where he serves on the homeowners association board. “The others are oblivious.”

The utility leases poles and fixtures to retail customers in Georgetown, Horry and Berkeley counties. Decker, who had a career in the energy industry with Johnson Controls, calculated that the monthly lease payments exceed the cost of the equipment after the initial three-year contract.

Using that formula – available at scstreetlights.org – a single pole and fixture leased over 25 years would have cost the customer about $2,500 more than the actual cost of equipment.

One community in Carolina Forest in Horry County pays $1.3 million a year because it has the most elaborate fixtures offered, he said. When that community asked about buying poles and fixtures last year, a Santee Cooper representative said leasing was the only option, unless the association wanted the equipment removed entirely.

Santee Cooper said that as part of state government, it was unable to sell assets without declaring them surplus.

“It all stems from Carolina Forest,” said state Sen. Stephen Goldfinch, who has been working with the associations. “I do think there are some concessions that can be made.”

“Heritage and other HOAs brought to my attention that they’ve been paying over time for the equipment,” Thomas said.

He got a call from Ray Pinson, the utility’s manager of local government affairs, to say that Santee Cooper’s position had changed.

Geoffrey Penland, the manager of state and federal government affairs, confirmed that in an email to Decker and local lawmakers.

“Santee Cooper has developed a new opinion related to the sale of lighting fixtures. Bottom line is, it is Santee Cooper’s position that it may sell lighting facilities to neighborhoods and legislation in this regard is not necessary,” he wrote.

It is unclear whether a policy change would apply to other customers, such as businesses.

Decker said his concern is that the leasing program is an enticement for property developers to enter into contracts for infrastructure that end up costing homeowners in perpetuity if they want street lights. “The homeowners didn’t get a decision. We inherit this agreement,” he said.

He also wants to talk about the cost LED fixtures, which use less electricity, but which end up being more expensive under the current leasing program, Decker said.

Santee Cooper’s policy and pricing are consistent with other utilities, said Mollie Gore, the manager of corporate communications. “The pricing is not designed to do anything other than cover the costs,” she said, adding that it includes maintenance and replacement.

SC&EG, a subsidiary of investor-owned Dominion Energy, doesn’t sell poles and fixtures, according to its outdoor lighting policy.

If communities are able to buy the equipment, they will still have to figure out how to get power to them.

Santee Cooper is governed by the National Electric Safety Code. It is able to connect the lights to its system. A private owner would either have to meet that code or have a meter on each pole, Gore said.

The cost of each meter is $1,000 to install and $35 a month, Decker said. That’s one of the issues he wants to talk about with Santee Cooper.

“Economically, I’m not sure it makes sense,” Goldfinch said. But he is willing to join in the conversation.

“That’s exactly why we would have to get together, to make sure we understand their priorities,” Gore said.

Before he was elected to County Council, Thomas was president of the Litchfield Beaches Property Owners Association. It differs from an HOA set up by a developer, but the association does pay for street lights.

The Litchfield Beaches POA doesn’t pay for poles or fixtures since they are installed on Santee Cooper’s existing poles, Thomas said.

He recalled doing an inventory as POA president. “We determined that we could turn off a couple and save some money,” Thomas said.