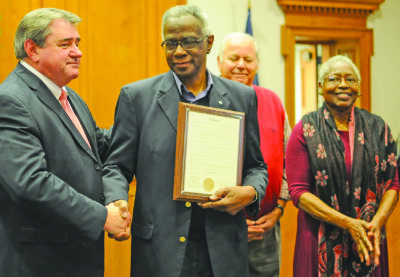 Retiring Council Chairman Johnny Morant with Austin Beard, left, who is due to replace him as chairman.

“The community has done a lot for me, has helped me throughout,” he said. It isn’t about the council, he added. “We’re trying to do things that unite all of us.”

Morant represents Council District 7, which is only a few miles across the Waccamaw and Pee Dee rivers from the Waccamaw Neck, but much farther when measured by population growth and services. But he has helped bring those areas together, former and current colleagues say.

“Folks on the Neck don’t hear about it, but the efforts of other council members to achieve consensus, that’s always going on,” said Jerry Oakley, who represented District 1 from 2003 to 2014.

“The word for him is consensus,” Council Member John Thomas, who now represents District 1, said. That’s what we needed and continue to need. I think the next chairman will act in the same manner.”

Morant didn’t run for re-election last year, citing health and other issues. His brother and law partner, Louis Morant, was elected to the District 7 seat and will be sworn in next week.

Council Member Austin Beard, who represents District 5, in the Andrews and Pleasant Hill areas, is expected to become the new chairman. (On Thursday, three groups including the local chapter of the NAACP called for an investigation of Beard’s eligibility, claiming he no longer lives in his district.) He has been vice chairman. He said many improvements around the county in the last 25 years have been the result of Morant’s leadership.

“His quiet, unassuming way has seen that things get done in a very distinguished and classy manner,” Beard said.

Oakley said that Morant’s low-key style – “patient, thoughtful, deliberative” – made it easy to overlook the role he played in issues on Waccamaw Neck, particularly zoning issues. “Land-use issues are always contentious,” Oakley said. “He navigated us through the thicket.” Developers would call Morant to lobby for zoning changes and he would let Oakley know.

“You’re not going to make everyone happy,” Oakley said. “You look for a solution everyone can live with. Johnny was instrumental in that countless times.”

Thomas said last year’s debate on rezoning property along the Sampit River from forestry to industrial use was an example. The change was approved with the council agreeing to some restrictions on uses in what will be a county industrial park.

“That diffused tense discussion and acrimony,”

“There have been moments, I think, when people have considered quietness to be a weakness,” Beard said. “But Johnny, in his quiet way, will let you know in no uncertain terms the route that we should take.”

Morant took over as chairman from Sel Hemingway, who gave up his seat on council to become the county administrator.

“It’s a true testament to his leadership to be able to accomplish significant projects,” Hemingway said, ranging from the All-America County award Georgetown received from the National Civic League to the redevelopment of the former Choppee High School campus for health, preschool and recreational facilities.

A reception for Morant was held in the rec center over the weekend.

“It was difficult for Johnny to agree to even have this function,” Hemingway told the audience. “He didn’t want any attention. He didn’t want anyone making a big deal over him or what accomplishments he’s had in service to the county.”

Morant received resolutions from the state legislature honoring his service and a donation in his name was made to a men’s service fraternity. When he got the microphone, Morant said the event was an opportunity to recognize the community for its accomplishments.

“It’s not an easy thing sometimes to accomplish such tasks in our rural community,” he said. “A lot of our rural areas are lacking because we don’t take the time to do what needs to be done.”

While County Council is supportive of various initiatives, Morant added, “we can’t expect it to be any more than we do for ourselves.”

“Getting people to work together” was the biggest challenge of his time on council, Morant said afterward. “With the council it wasn’t as much of a challenge. We all got along.” What was harder was getting people from different areas of the county to find common ground. “Like zoning on the Waccamaw Neck,” he said.

Oakley pointed out that Morant also took heat from constituents in his rural district when the council extended zoning regulations beyond the Waccamaw Neck.