Too much of a good thing for water utility – Coastal Observer

Too much of a good thing for water utility 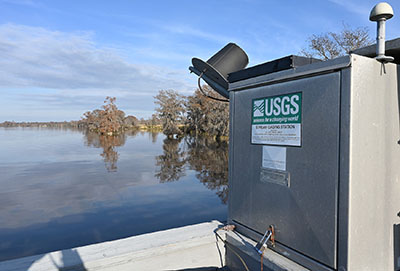 The water level at Hagley Landing is measured by a gauge at Heritage Plantation Marina.

Increased rainfall is raising the cost of providing drinking water at the same time it is reducing demand from customers of the Georgetown County Water and Sewer District.

“All the rain we’ve been getting has been washing everything out of the swamp areas, which is very high in tannin,” said Ray Gagnon, executive director of the utility. “It’s the brown you see coming down the river.”

“It’s not a contaminant,” Gagnon said.

The water district’s drinking water is taken from the Waccamaw River between Willbrook and Sandy Island. Starting last July, it began seeing an increase in the color of the water coming into the treatment plant, said Michael Yip, the district’s operations director. He forecast that it would continue to increase.

So, midway through its budget cycle, the district raised its budget for two chemicals used to treat the water by a third, drawing on its contingency funds.

“We have to do a lot more treatment,” Gagnon said.

Ferric chloride is used to remove the organic matter dissolved in the water. Sodium hydroxide is used to raise the pH of the water and reduce corrosion. The increased cost of those chemicals is nearly $100,000.

The rainfall also means customers are using less water for irrigation. Demand is down by 25 percent, said John Buck, the district’s finance director. Through the end of 2020, the district’s revenue from water sales was down by just over $192,000.

Data collected by the National Weather Service shows that from October 2019 through September 2020, the federal fiscal year, rainfall was 33 inches above the 30-year average for a monitoring site near Pawleys Island.

It usually takes three to six months for the water quality to return to normal.

“This weekend didn’t help at all,” Gagnon said. Rainfall was reported at about 2.5 inches.

The district is used to dealing with the rise and fall of the rivers. In 2007,  it was a drought that raised the cost of maintaining drinking water supplies.

It has plans to move its raw water intake to reduce the likelihood of saltwater intrusion caused by rising sea level. That remains a goal, but it isn’t an immediate concern.

The river “usually goes down, but it’s not,” Gagnon said.