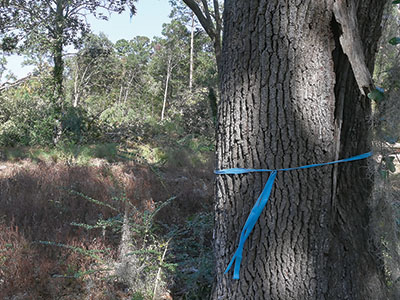 Lowering the threshold for “grand trees” from 30 to 24 inches in diameter is among the proposals.

Like many of the species it seeks to protect, a revision to the Georgetown County tree regulations is growing slowly.

The Planning Commission last week deferred action on the proposal to allow the planning staff to consider a few more changes.

It was the second time in two months the ordinance had been scheduled for a public hearing only to be delayed. Each time, there was only one speaker.

This month, it was the Coastal Conservation League’s new director for its North Coast office, Becky Ryon, who delivered written comments praising the county’s decision to preserve the existing tree canopy and suggesting some additional ways to do that.

“We want to protect the existing trees rather than replanting,” Ryon said. “There’s no guarantee that they’re going to thrive.”

The key features of the revision, first presented in February, are intended to require that developers retain as many existing trees as possible rather than clearing and replanting trees

There aren’t many ordinances that are written that way, said Holly Richardson, the county planning director.

“I’ve read of lot of ordinances,” she said. “I think we’re ahead of the curve in a good way, but it made me want to be cautious.”

Another proposed change would reduce the diameter of “grand trees” that receive the highest level of protection from 30 inches to 24 inches. On

Waccamaw Neck, the ordinance would require a property owner seek a variance from the Board of Zoning Appeals to remove a grand tree anywhere except on a single-family lot. Those trees cannot be removed to allow installation of infrastructure for residential subdivisions under the current regulations.

The tree regulations in the county zoning ordinance were last revised in 2018. Among the changes, developers were no longer allowed to clear land for residential  developments. Instead, they could only receive permits to clear a lot when they applied for a building permit.

Under the proposed revisions, multifamily and commercial developments would be required to keep at least 10 trees or 100 inches of trunk width per acre. That width is a measure of the diameter of the trunks at breast height, a point 4.5 feet of the ground.

If trees had to be cut to allow reasonable use of the property, replacements would have to be planted to restore the 10-tree or 100-inch requirement. If replacement trees can’t be planted, the developer would be required to make a donation to a tree fund equal to the cost of those trees.

The Coastal Conservation League proposed adding a requirement that the replacement trees be of the same species as the ones removed unless the planning director agrees to a species that would improve “biological diversity.”

The league also suggested that when a developer pays into a tree fund the money should be used for replanting in the area where trees were removed.

“We definitely need to be looking at like-to-like tree replacement,” commission member Sandra Bundy said. “I feel like we’re not doing enough.”

Throughout the revision, commission members have questioned whether the county’s $500 penalty for violations is enough of a deterrent.  Richardson talked with the county attorney, who advised that it remain at that level.

The penalty is for each tree, Richardson noted.

Commission member Marla Hamby said she still has concerns and asked if the Coastal Conservation League had any ideas.

The league recommended that if trees are cut without a permit, no development permit will be issued for up to two years for the site unless the owner provides mitigation. That mitigation would be 25 percent more than the DBH of the trees that were cut.