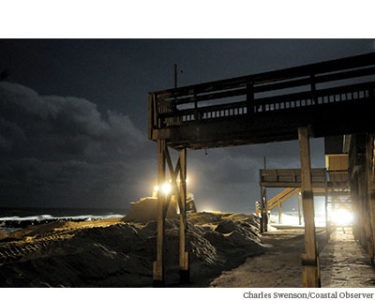 Work on the beach will continue around the clock for three or four months.

A beach renourishment project that has been planned for over 20 years will start as soon as the last sea turtle hatchling leaves Pawleys Island in October under a project approved this week. Town Council voted to work with a private contractor rather than the Army Corps of Engineers, with members saying they were willing to give up the promise of federal funding in order to complete the project before the end of another hurricane season.

The town will hire Marinex Construction of Charleston to place at least 850,000 cubic yards of offshore sand on 2.4 miles of beach, starting at the south end, at a cost of $11.8 million. The company was the low bidder among three firms for a town-sponsored project last year. Before the council could accept the bid, the Corps announced that there was money in the federal budget for a beach renourishment project that agency approved in 2006 but Congress never funded.

The Corps would have funded 65 percent of the cost of renourishment along 1.4 miles of beach at the narrow south end. The town planned to extend the project north to Third Street using local and state funds. The original timeline called for the Corps to solicit bids this month. That was delayed when the agency said it needed to update a cost-benefit analysis from 2005.

“We are now, at the earliest, looking at sometime in September before that evaluation process is through,” Braswell said. And even then, the town won’t know whether the Corps will fund the beach work at the level the town needs, he added. Braswell and council members were concerned the town would have to go through one, and perhaps two, hurricane seasons without additional sand on the beach.

There was also concern that even if the Corps project got back on schedule the handful of companies that could do the work would be tied up elsewhere. Town Administrator Ryan Fabbri asked their consultants to sound out those firms.

That led to an offer last week from Marinex to cut its price by $500,000 from its 2018 bid. The firm told the town it needed a decision before it entered bids for two other projects out of state. Town Council met Friday afternoon to review the offer and approved it Monday morning.

Former Mayor Bill Otis, who has continued to work on the project since stepping down in 2017, said he doubted the Corps would fund the full project, which called for placing 850,000 cubic yards of sand on the south end at a cost of $17.2 million.

“The question for council is: Will they do it at all?” Council Member Rocky Holliday said. He chaired the beach committee that recommended in 2017 that the town do its own project. “That’s the biggest concern I have.”

Steven Traynum, the project manager for Coastal Science and Engineering, the town’s consultants, also pointed out that bids for two recent Corps projects had sand costs 30 and 50 percent higher than the estimate.

“There’s so much uncertainty in trying to deal with the Corps,” Council Member Ashley Carter said.

There are benefits, too. In addition to funding the initial project, the Corps would pay half the cost of periodic renourishment over the next 50 years and pay to replace sand lost to storms in the meantime. The town lost 180,000 cubic yards of sand from the beachfront in a series of storms from 2015 through 2018, according to Coastal Science and Engineering.

“The advantages of going with the Corps project are huge,” Holliday said. But he added, “you have to weigh that against the potential that they won’t do anything at all.”

The town “is responsible for protecting property and property owners,” Braswell said. If the beach renourishment is delayed further, “I think we’ll be doing our homeowners a disservice.”

“The Corps understands the timing that led to a decision by the Pawleys Island Town Council to move out with construction of its own beach renourishment project,” Sean McBride, spokesman for the Charleston District, said. “We appreciate that this was within their discretion to assess the circumstances and determine what they believe to be best for their community.”

Once the project is completed, Pawleys Island will have an “engineered beach” that will qualify for federal disaster funds if it is damaged by a named storm. That’s like an insurance policy, Braswell said. Two policies, Holliday said, noting that the wider beach will reduce property damage from storms.

The town already has state and federal permits for the project designed by Coastal Science and Engineering. They allow work to begin Nov. 1. Marinex wants to start in October. Traynum said he thinks the permits can be modified as long as the work doesn’t interfere with the sea turtles.

That start date would also coincide with the peak hurricane season along the South Carolina coast. It would be an advantage to the town to have the dredger in place. While it would move out of the storm’s path, it would be ready to resume work afterward, Traynum said.

One way or another, the town of Pawleys Island will spend more than $6 million to renourish its beach. But by going with a local rather than a federal project, it will give up an estimated $11.2 million.

It was the uncertainty of federal funding that led Town Council to agree this week to abandon a partnership with the Army  Corps of Engineers and return to a local project that it was ready to approve a year earlier.

What made up for the loss of federal funding was the discounted price offered by the dredging contractor, Marinex Construction and the availability of state funds approved in the wake of Hurricane Matthew in 2016.

The combination of the two means the town could pay as little as $5.50 a cubic yard for sand, said Steven Traynum, the project manager for Coastal Science and Engineering. By comparison, the Corps estimates the cost of sand at $12.80 a cubic yard and has received prices for other projects of about $15 a yard.

Town Council approved a project to place 850,000 cubic yards of sand on 2.4 miles of beach. That is the volume of sand that Coastal Science said was needed to stabilize the beach after Hurricane Matthew in 2016.

Several of the 16 property owners who attended this week’s council meeting urged the town to place as much sand on the beach as possible. The price “is still a pretty small number compared to the property value,” David Shuford said.

Council members said they would consider raising the sand volume to 900,000 cubic yards.

Under the Corps project, the town would have paid $3.2 million for work in the area north of Hazard Street and borrowed $3.6 million for its share of the south end work.

“Any way you look at it, the Corps is a much better deal financially,” Administrator Ryan Fabbri said.

It would have allowed the town to keep money in its beach fund for emergencies. Under the local project, the beach fund will drop to $202,000 next year.

It will be back up to $2.5 million in 10 years, the time when the town may be looking at another project.