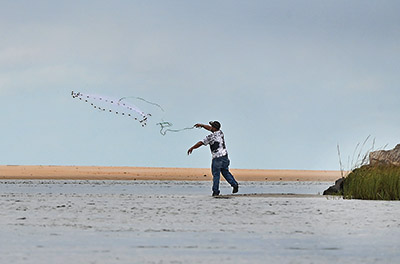 Casting for bait from the north end of Pawleys Island, where a sand spit has formed in the middle of Midway Inlet.

Before it spends any money on studies, the town of Pawleys Island wants to find out from engineers whether a project to dredge Pawleys Creek is likely to get permits from federal and state regulators.

The town is committed to pursuing the issue, Mayor Brian Henry said. He wants to get the information at a budget workshop next month.

Shoaling in the creek has been a concern of island property owners since the 1980s. A study commissioned by the Pawleys Island Civic Association in 1980 pointed out that it was a natural process.

Last year, Town Council identified the creek as one of the four major focus areas in a strategic plan. The others were beach renourishment, drainage and funding for capital projects. After the Litchfield Beaches Property Owners Association started discussion this summer about dredging Clubhouse Creek on the north side of Midway Inlet, the town agreed to get additional information about Pawleys Creek.

A proposal from Coastal Science and Engineering, the firm that designed and managed a beach renourishment project for the town, would provide “a preliminary assessment” at a cost of $46,000. That would include discussions with regulatory agencies.

“Agency feedback is critical to understanding what level of engineering analysis, environmental assessments, and pre- or post-project monitoring may be required,” the proposal states.

Those factors would all affect the cost of the project.

“It’s a feasibility study to take a look at all the elements,” Administrator Ryan Fabbri told Town Council this week. “It might not be worth the time and effort,” based on the response from the agencies.

Council Member Guerry Green wanted to know more about the town’s chances of getting approval. “It just seems like a conversation [the town should have] with them before we commit to $46,000,” he said.

The town last dredged portions of the creek during the winter of 2007-08. It pumped 38,000 cubic yards of sand from shoals at the north and south ends of the creek onto the beach at a cost of $450,000. The town first tried to get state and federal permits for dredging in 1995. It finally got approval in 2004, then amended the permits to allow sand to be pumped onto the beach at each end of the island.

The dredging was limited to sand shoals and intended to create channels with an average depth of 2 to 3 feet at low tide.

One key question is where new dredging would take place, Henry said.

“It depends on who you talk to,” Green said.

“If you open up the inlets,” Henry said, “obviously it’s not going to satisfy everyone.”

The proposal from Coastal Science and Engineering would help narrow a project’s focus. The firm’s work would include a field survey to determine the location of shoals and the quantities of sand they contain. It will include “useful information that could assist the town in other resiliency efforts,” the proposal notes.

While a series of hurricanes between 2015 and 2019 washed sand into the creek, Green said it may not be necessary to dredge it.

“It’s cyclical,” he said. “Mother Nature has a way of taking care of itself.”