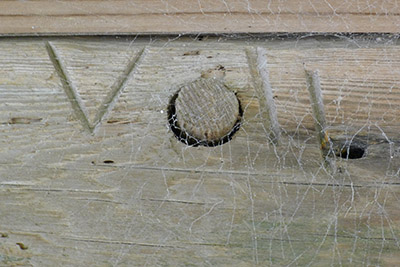 Roman numerals mark location of pegs in the beams under the Pawley House, one of the oldest on the island.

If Bruce Bailey decides to paint the Pawley House green, he hopes the town of Pawleys Island will stop him.

The house was built in the late 18th or early 19th century and is one of nine historic properties that the town Planning Commission wants to protect.

Town Council said the idea needs further review, particularly since historic preservation came on the heels of the creation of an architectural review board that must approve plans for new houses.

Bailey and his wife bought the Pawleys House, also known as the Joseph Blyth Allston House, in 2013 as a second home and have since made it their primary residence. He understands that people want to use their property as they see fit, but he said historic properties are different.

“We wouldn’t want that for the Pawley House,” Bailey said. “There should be an exception that you don’t change the character of the island.”

Bailey and Connie Bull, whose family owns Liberty Lodge, met with the commission last week and endorsed the idea of historic preservation.

Liberty Lodge, also known as the Joshua John Ward House, and the Pawley House contain some of the oldest architectural elements on the island, according to Katherine Richardson, the historian whose work was the basis of historic markers placed at eight sites.

Commission members were surprised that the owners were willing to go further than just restrictions on moving or demolishing historic houses.

“Exterior painting should be monitored, regulated,” Bailey said. “That should be fair game to be part of the plan.”

Bull tried without success to get a color palette approved as part of the architectural guidelines for the city of Georgetown when she served on its review board.

She agreed that it made sense for Pawleys Island’s historic homes.

“I am totally in favor of retaining the culture and history of the area,” Bull said.

Mayor Brian Henry, who sat in on the commission meeting, thought the color restriction would be a hard sell. Even the town’s new guidelines for new houses don’t address color.

If the town decides to make that a restriction on historic houses, “you’ve got some assurance that you don’t have to fight everybody,” Bailey said.

Commission member Robert Moser pointed out that restrictions adopted by the town would likely affect the value of the historic properties, particularly those on lots that can be subdivided.

“They’re not only buying a piece of land,” Bull said. She added that the town should also adopt regulations to protect the maritime forest that surrounds many of the historic homes.

“There is value in having those expectations for historic houses,” Bailey said.

Where the owners asked the town for consideration was on the interior.

“Interiors have to be treated a little more carefully,” Bull said. “You don’t want to have to wash every dish by hand.”

The town is only concerned about the view from the street and from the beach, commission member John LaMaster said.

Bailey also raised the issue of what the town will require if a historic home is destroyed. “You’re going to have a lot of gray area for people to play around in,” he said.

John Hildreth, who chairs the commission, said he hoped to get input from other owners of historic homes.

“That’s what we needed, some sort of direction,” he said.