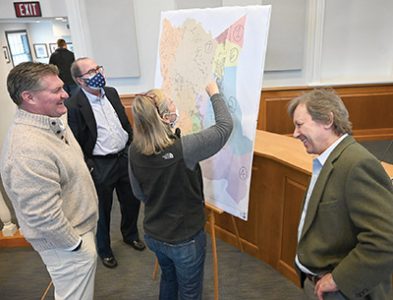 A redistricting map adopted this week by Georgetown County Council separates School Board Member Lynne Ford from her district by the width of a street even as it pulls the rest of the Waccamaw Neck together into three compact districts.

The seven council districts are also used by the school board for seven of its members. (Two are elected county-wide.) Ford in District 6 and Pat DeLeone in District 2 were drawn out of their districts, but will be able to serve out the remainder of their terms, according to the county attorney.

The county asked the state Office of Revenue and Fiscal Affairs to help create new district lines following the release of 2020 Census data last fall. The agency produced two alternatives that kept the current council members and school board members in their existing districts. That plan also divided District 2 between the Waccamaw Neck and the Kensington neighborhood outside Georgetown. It moved DeBordieu from District 2 to District 4, which includes the city of Georgetown.

Council members rejected those changes and met with Stephen Williams, the county’s GIS manager, to revise the maps.

The final decision on the districts rests with the council, which isn’t required to consider the impact on the school board.

Under the amended map adopted by the council this week, DeBordieu is back in District 2, which no longer crosses the Waccamaw River. District 1 doesn’t extend beyond Murrells Inlet. District 6 runs from Murrells Inlet south to Waverly Road on the west side of Highway 17 and to McKenzie Beach on the east side.

The map also reduces the number of majority Black districts from three to two, in line with the shifting population.

There is a portion of District 6 that dips south of Waverly Road. It runs right in front of Ford’s house, but still leaves her in District 2

Ford said she was aware of the change, but hadn’t seen the map yet.

Her situation is a function of the way maps are drawn, Williams said.

The smallest unit that can be changed is a census block. Ford happens to live in a block that has 683 people.

“You can’t split the block,” Williams explained. “If you move it, it affects all the other districts.”

The population between the largest and the smallest council district cannot vary more than 10 percent. The 683 people in Ford’s census block represent 7.5 percent of the ideal population of a voting district.

School board policy requires that members vacate their seat if they are no longer living in their district, but Lindsey Anne Thompson, the school district attorney, said that policy runs counter to an attorney general’s opinion.

“It appears the prevailing view is that school board members who are redistricted out of their election districts should be permitted to fulfill their current terms,” she said.

Jay Watson, the county attorney, told the council before they approved the map that was also his opinion.

“It was always our understanding that if that ever happened they would serve their term out until the next election,” Council Member Raymond Newton said.

That is provided for in state law for council members, Watson said, but not for school board members. That’s why he is relying on the attorney general’s opinion, which was issued in 2012 in response to redistricting in Lancaster County.

Ford’s term runs until 2024. DeLeone is up for re-election in November, but said she doesn’t plan to run for another term.

Council Members John Thomas in District 1 and Steve Goggans in District 6 don’t plan to run for re-election this year. They were both drawn out of their districts in the map approved this week.

Before voting to give second reading to a redistricting ordinance, both confirmed that they would serve until Dec. 31.

“Essentially you serve out your term,” Watson said.

The public can review the maps and leave comments online at georgetowncountysc.org.

There will be public meetings to take comments Jan. 18 at the Choppee recreation center, Jan. 19 at the Howard Center in Georgetown and Jan. 24 at the Waccamaw recreation center in Parkersville. They begin at 6 p.m.

The council expects to vote on a final version of the maps no later than Feb. 8.