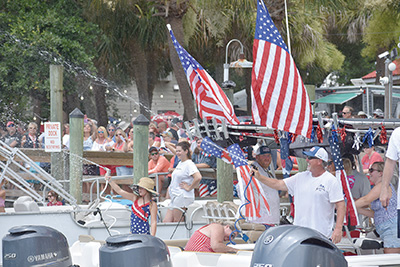 Spectators along the Marsh Walk spray the passing boats.

Mother Nature rained on the Murrells Inlet Boat Parade on Monday, but not enough to dampen the enthusiasm of participants and spectators.

“The parade went great. The participation numbers were higher than what I thought we would have, considering the forecast,” said Lee Hewitt, who co-chairs the parade committee. “The boats were loaded with kids and families. It’s just a great family event.”

The theme for the 39th annual event was “American Heart, Southern Soul” and American flags were flying on boats and along the Harborwalk, which was packed with spectators who engaged boaters in water battles all along the route using squirt guns and hoses. One participant tipped  the outboard on his boat to spray onlookers with water from the propeller.

“From the pictures of Belin [church] and the Marshwalk, it was very well attended,” Hewitt said. “It’s just a good day for Murrells Inlet.”

Although the parade has an unofficial “no throwing things from boats” policy, there were reports that people on at least one boat were throwing water balloons, and Sheriff Carter Weaver was tossing koozies and boat whistles to people.

Rain showers moved in as the parade was wrapping up, and a short time later, the shower turned into a downpour

“Hopefully, everybody was off the water and in a safe location when that bad storm came through,” Hewitt said.

Hewitt knows how many boats participated – 64 – because he took a picture of every one for the parade’s Facebook page. In past years, more than 100 boats would sail in the parade. Hewitt said some people did not participate because there was a 60 percent chance of thunderstorms.

An 11 a.m. kickoff for the event also meant some people didn’t have their boats in the water yet. The Inlet event is the one parade that can not be rescheduled on July 4 since it is dependent on the high tide.

“That meant you really needed to have your boat in by 7 or 8 in the morning because of the backlog at the boat landing,” Hewitt said.

Boy Scouts sell parade T-shirts every year as a fundraiser. Of the 3,000 they had, fewer than 100 shirts were left, Hewitt said.

“It’s a win for the Boy Scout troop,” he added. “They did a tremendous job, and the community certainly supports it.”

The parade used to award prizes for best boat and dock decorations, but that stopped last year when the event returned after a one-year hiatus due to the COVID-19 pandemic.

The parade committee is thinking about bringing prizes back next year. If they don’t, Hewitt hopes it doesn’t discourage people from participating.

“I’ve had a few people say they would like to have that restored. In the two years we haven’t, it certainly hasn’t affected whether the people participate or not,” Hewitt said. “Hopefully they don’t make judgments to participate based on a trophy. I hope it’s a day that they get out and celebrate Independence Day and enjoy the inlet.”

The weather was not kind to other events.

Planes participating in the 13th annual Salute from the Shore flew from Cherry Grove to Beaufort, but were obscured by clouds and passed by Pawleys Island during a downpour.

Hours of rain also caused the postponement of the Indigo Choral Society’s outdoor concert at the Kaminski House Museum in Georgetown. The group is hoping to perform during Labor Day weekend.