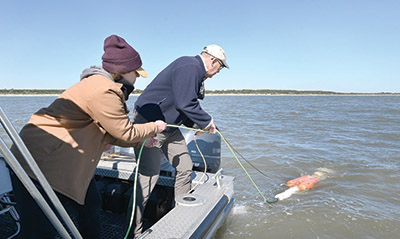 Amber Cabaning and Jim Spirek haul in the magnetometer on their last day of field work for this year. They will analyze the data over the winter.

A small aluminum work boat skimmed over the placid water where the Santee River meets the Atlantic Ocean, watched by flocks of brown and white pelicans that had settled on a sand bank. A chartplotter and sonar helped Jim Spirek pick his way through the shoals.

It was the shoals that doomed an earlier visitor.

The flagship of a fleet of six Spanish ships that set  out from Hispanola out to colonize the North Atlantic coast in 1526 foundered at the entrance to what the Spanish called the River Jordan and cost the expedition a large portion of its supplies. No lives were lost in the wreck. The survivors traveled south and founded the colony of San Miguel de Gualdape. It lasted about six weeks. Of the more than 600 people who began the journey – who included families, enslaved Africans and Native Americans captured on earlier forays – fewer than 200 survived to reach settlements in the Caribbean.

Lucas Vázquez de Ayllón, the leader of the expedition, was among those who died.

If found, the shipwreck would be the oldest in the continental U.S. It would be a clue pointing toward the location of the failed colony. “There would be worldwide interest,” said Spirek, the state underwater archaeologist at the S.C. Institute for Archaeology and Anthropology.

The wreck has been the subject of speculation and searches in the past. Last year, the state legislature approved $250,000 for a new study, looking at the Santee River inlet.

“These guys think that this find could really rewrite history. It could be a bigger find than the Hunley,” said state Sen. Stephen Goldfinch, who sponsored an earmark for the project.

It was evolving technology that led to the discovery of the Confederate submarine off Charleston, Spirek said. He hopes the same will prove true for the Spanish shipwreck.

“The Hunley would never have been found by sonar,” he said. It was buried too deep in sediment.

It was a magnetometer that detected the buried metal hull.

Spirek and a crew of researchers have been towing a cesium magnetometer over about 12 square miles of coast around the Santee inlet this year. They will combine the data with sonar scans to identify sites that warrant further investigation.

“Your hands and your eyes are your best tools,” Spirek said.

Archaeologists, including Spirek, searched the area off Winyah Bay in the early 2000’s looking for the wreck. The late Jim Michie, an archaeologist at Coastal Carolina University, searched for the site of the Spanish colony on Hobcaw Barony in the early 1990s. Both projects came up empty.

This time, Spirek also plans to extend his search over the marshes that border the Santee River using a magnetometer attached to a drone.

South Island, just below Winyah Bay, has grown by about 2 miles since jetties were installed to stabilize the entrance, said Amber Cabaning, an underwater archaeologist hired for the project.

“The mouth of the entrance to the Santee River has also changed drastically,” she said. “This whole coastline has shifted. It’s stayed in relatively the same area, but the shipwreck would be a long way inshore.”

Spirek, Cabaning and Josh Jakubs, an intern, made their last ocean survey of the year in mid-November. They towed the magnetometer behind their boat as it cruised at a sedate 5 knots parallel to South Island. The boat turned every mile and moved another 50 feet closer to shore, gathering data that will be compiled into maps at the institute in Columbia.

“There’s all sorts of modern debris,” Spirek said. “By rule of thumb, when you’re working in a harbor like this, about 98 percent of what we’ll get will be modern rubbish.”

The Ayllón flagship, or “capitana,” was probably at least 100 feet long, perhaps larger. The debris should be scattered over two or three of the 50-foot-wide search lanes.

“We’re hoping the large anchor is still there,” Spirek said.

That would leave the biggest footprint. It’s also possible that a portion of the ship’s hull, filled with ballast, settled on the bottom. That would have preserved some of the timbers.

The search will provide a good return on the state’s investment if the wreck is found, Goldfinch said. He has dived on and helped salvage wrecks. A 22,000-pound propeller that he raised from a freighter that sank off Cape Romain in 1905 is on display outside the S.C. Maritime Museum.

A wreck with the historic significance of Ayllón’s will provide a draw for tourism as well as related research, he said.

Goldfinch is particularly intrigued by the researchers’ ability to explore the estuary by drone.

“Four hundred, five hundred years ago, sea level was very different,” he said. “Everything has changed.”

The drone work will start next year, Spirek said. The institute will also hire a researcher to look for additional information in Spanish archives that could narrow the search.

“Probably doubtful, but give it a chance,” he said.

The current earmark is due to expire next year, but Spirek said he may be able to get an extension. His team has been dividing its time in the field between Georgetown and a French shipwreck in Port Royal Sound. They also need to analyze data from this year’s scans.

“We’ve got some target areas that we need to investigate. We can’t even say we don’t know where it is yet,” Spirek said. But if those don’t pan out, he added, “it’s never ending. You keep looking until you find it.”