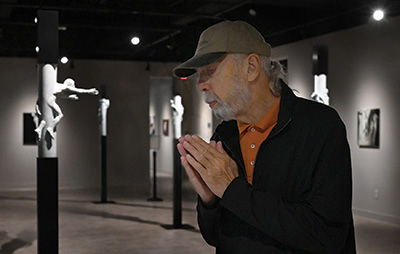 Thomas Schomberg says that even after 20 years the emotions are too raw in New York for the exhibit to be displayed there.

Thomas Schomberg spent the last 19 years trying to capture the emotions of the terrorist attacks of Sept. 11, 2001, in bronze.

“As an artist, I don’t understand cause, but I think I have a feeling for effect, and I know the effect this had on me and what it had, I can only imagine, on people that lost loved ones and the poor souls that passed,” Schomberg said. “What I’m trying to express, the key issue here, is that we shall not forget those that were lost, nor the families that have had to suffer.”

An exhibit of his work, “Remembering 9/11” is now on display at Brookgreen Gardens. The sculptures represent what happened at the World Trade Center and on United Flight 93 on Sept. 11.

“I’m so honored to be here at Brookgreen. This is a South Carolina institution,” Schomberg said. “This place is magnificent. It has a collection of all of the people that I’ve admired over the years.”

Each sculpture is cast in bronze with a white patina and set 54 inches above the floor on a bronze column.

Schomberg hopes people will look first at the bottom of the column and then let their eyes travel upward to the sculpture, like they did when looking at the twin towers.

Visitors with a keen eye will find one toe on each sculpture that has been polished to reveal the bronze underneath.

“Hands and feet to me can be as expressive as faces,” Schomberg said.

The exhibit starts with “Door of Sorrows,” which features a female figure embracing herself on an open door. It’s meant to express pain, grief and sorrow and is larger than the other sculptures and the only one not attached to a column.

“If you’ve ever had a loved one pass unexpectedly, it’s such a shock, it’s such grief and it’s so painful,” Schomberg said.

The exhibit continues with the nine columns, which are positioned in a sequence starting with “Malice” and ending with “Renewal.”

“Malice” is the last piece Schomberg worked on and he left it unfinished because he said evil is never finished.

“I struggled with ‘Malice.’ I don’t know how you capture evil,” he said. “I’m not sure it’s evil. It’s the expression of evil.”

“Discovery” refers to the passengers on the airplanes realizing in their final moments what their fate was going to be.

“What would go through your mind?” Schomberg said. “There’s nothing you can do. It’s fear, it’s anger, it’s shock.”

The next sculpture, titled “Acceptance,” represents the people trapped in the buildings above where the airplanes hit.

“What would you do in a situation where you realized there’s nothing you can do?” Schomberg said. “The towers didn’t go down … for 100 minutes. You had that time to ponder your fate.”

“Flight” features three figures, each with one foot off the column. It represents the people who made the decision to fall to their deaths rather than burn.

“They were in control of their own destiny,” Schomberg said. “They decided to leave the buildings.”

The piece that Schomberg said captures his emotions the best is “No Exit.” He was inspired after visiting New York City shortly after the attacks and seeing posters everywhere with information about missing people.

One that particularly struck Schomberg was about a man who started his new job at the trade center on Sept. 11.

“When I think about that, the tragedy of something like that,” Schomberg said. “There’s no way to escape. The poor soul had no chance and that’s why [in the sculpture] he’s blindfolded.”

“Resistance” is a tribute to the passengers on Flight 93, who fought back, causing the hijackers to crash the plane in a field in Shanksville, Pa.

“It’s where the souls really tried to control their destiny, they tried to take the plane over,” Schomberg said. “It’s the encouragement of one figure to the other.”

“Companions I” and “Companions II” features figures clinging to the column while at the same time reaching out. Schomberg said it represents the people in one tower looking across to the people in the other tower.

The exhibit ends with “Renewal.” A pregnant woman represents the dozens of babies born after their fathers were killed in the attacks.

“We go on with our life and we are not going to let [malice] determine our destiny,” Schomberg said. “What we’re doing with renewal is really going to help us grow and process this whole event. But it’s not going to be easy.”

Schomberg chose to portray the figures as nudes to show their vulnerability.

“There is no social-economic [difference] between these figures,” Schomberg said. “They could be a CEO and another figure could be a janitorial worker. They all suffered the same fate and there was no distinction in that fate.”

Each sculpture is accompanied by a label that has the name, a short explanation from Schomberg, and a quote from a survivor or witness.

When he began, Schomberg had no idea how many sculptures he would create or how long he would work on them. He worked on them in his spare time when not working on commissioned pieces.

“All of them mean a lot to me, they’re kind of my children,” Schomberg said.

Also, Schomberg is not sure he’s done, even though the exhibit had its premiere Friday at Brookgreen.

“Right now it’s a total collection, it expresses the various stages of that tragic day. Could it be added to? Perhaps,” Schomberg said. “This is just scratching the surface. How many stories are there?”

Schomberg has created many memorials, including for veterans, war dogs and the U.S. boxing team that was killed in a plane crash in 1980.

Schomberg said many people, especially in New York City, are still dealing with the impact of what happened on Sept. 11, 2001, and are not ready to see an exhibit like his.

“It’s too raw, it’s too bitter, it’s difficult,” Schomberg said. “Right now they can’t deal with it. It may take generations to deal with it. We’ll never know.”

How much: Free with regular admission