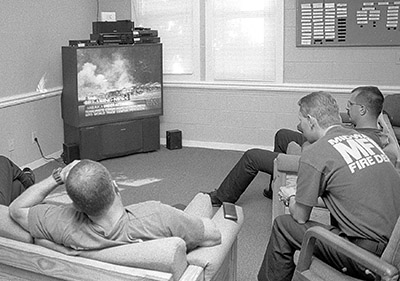 Midway firefighters watch news coverage of the attacks on Sept. 11, 2001.

That was the mantra after the terrorist attacks on Sept. 11, 2001, that killed 2,996 people at the World Trade Center in New York, at the Pentagon in Arlington, Va., and in Shanksville, Pa.

“It was ‘hoo-rah’ and flying the flag for the first few years and now it’s sort of scary that people may sort of forgot what happened that day,” Nugent said. “I never ever will. But I’ve been in the business for a long time. I think it’s going to be dependent on people like me and other folks to make sure it stays alive.”

Nugent was a battalion chief with the Chesterfield (Va.) Department of Fire and EMS on 9/11. He keeps a piece of steel from the World Trade Center in his office.

He said his friends in the fire service who responded to the attacks remain “low-key” about it.

“They want to move forward, but they obviously want to remember the past and honor their friends,” he said.

Fanning was working for the New York Police Department’s hate crimes unit in 2001. He lost his uncle, FDNY Capt. Walter Hynes at the trade center.

After the attacks, Fanning helped with the recovery operation at Ground Zero. He later retired and moved south, joining the Pawleys Island Police Department in 2008. He was named chief in 2012.

Fanning will spent part of Saturday, the 20th anniversary of the attacks, having lunch with dozens of retired New York City police officers. They all live in the state and keep in touch.

The terrorist attacks will be part of the conversation, but not all of it.

“We’re trying to walk that fine line of respectfully remembering everybody without bringing everybody back to the day,” he said.

Shoemaker grew up in New York City and watched the twin towers being built.

“As a young person I saw them going up,” Shoemaker said. “And then to see them come down, there’s no words to describe what goes through your head when I saw something like that.”

Before retiring to Pawleys Island 25 years ago, Shoemaker worked for five years for Cantor Fitzgerald, which lost 658 employees in the trade center on 9/11. She knew many of the victims, some of whom were at the beginning of their careers.

“Cantor Fitzgerald had a lot of young people because it was a training operation,” Shoemaker said. “That kind of business is for young minds.”

Shoemaker and her husband, Bob, are more afraid this year than on past anniversaries of the attacks.

“Things can happen again with terrorists. That scares the hell out of me,” Shoemaker said. “We’re going to have those terrorist pods again. We’ve haven’t had them in a long time.”

Ten years ago the Shoemakers helped fund a 9/11 memorial at Midway.

Angie was surprised that “little” Pawleys Island was going to be home to a piece of steel from the trade center.

“Here I am, I worked in the trade center for Cantor Fitzgerald where everybody got killed and it’s right on my corner,” Shoemaker said.

Julie Clark, a 2001 Waccamaw High graduate, was a classics major at the College of Charleston and on her way to way to a career working in museums when the terrorist attacks happened.

Now she’s a 15-year veteran of the NYPD, following in the law enforcement footsteps of her father and grandfather.

“After 9/11 it was so traumatic, watching what they went through,” Clark said. “It kind of inspired me. It kind of brought everyone together.”

Clark’s husband, Robert, was an NYPD sergeant on Sept. 11, 2001, and helped people evacuate from the twin towers. Now retired, Robert is one of the thousands of New York police officers and firefighters dealing with health issues from breathing in the toxic dust after the towers fell.

“Everybody unfortunately is dealing with long-term health effects from when the towers came down and caused all the debris,” Julie Clark said. “We’re still dealing with the lasting effects of that.”

Julie Clark said the city is very “solemn” every year around the anniversary with a large memorial ceremony at the National September 11 Memorial & Museum and smaller ceremonies around the area.

“You remember everybody who passed but everyone knows somebody who is currently sick, unfortunately,” she added. “It’s hard because every year you lose more and more people. I think it has a lot of lasting effects.”

After the terrorist attacks, Julie Clark’s father, Dennis Cangelosi, wanted to do something more than donate money to relief efforts.

“We worked together,” Cangelosi said. “We felt like we lived in such a beautiful community and we had the resources, the beach and entertainment venues to help them. That would be a good way to give back and help soothe some of the stress and the horror of what these firefighters went through.”

In all, about 40 firefighters brought their families to the Waccamaw Neck in the spring of 2002.

Cangelosi even recruited the writer Mickey Spillane, who grew up in the Bronx, and the New York Yankees legend Bobby Richardson to meet with the visitors.

“They were a great help,” Cangelosi said.

Cangelosi said he knows of a lot of police officers and firefighters who either survived the attacks, or volunteered at Ground Zero, who later committed suicide.

“Unfortunately for some people it’s still an open wound,” he said. “Some people were unable to process it. That’s probably the part that’s frustrating for some.”

When Austin Meares was planning his Eagle Scout project as a 14-year-old, he settled on a 9/11 memorial at Midway’s headquarters station.

“As I’ve gotten older I’ve met more and more people who were affected by 9/11,” Meares said. “At the time I’d lived my whole life in South Carolina and never even been to New York. It seemed a little distant.”

Meares was nervous about raising the $6,000 for the project.

“I didn’t think it was going to work,” Meares said. “I talked to every club and church group and people just came out of the woodwork. Folks that had retired from New York, or that were related to firefighters or that worked in the trade center. I was amazed at the number of people just in Pawleys Island that had connections up there.”

Meares finished the memorial when he was 15. He was the valedictorian of the Waccamaw High School Class of 2013 and graduated from Clemson University. He now lives in the Upstate with his wife and child.

He likes hearing from Midway firefighters that people stop by to see the memorial.

“It’s really been an honor because it’s been a lasting part of the community,” Meares said. “When I go back, I drop by. They keep up the landscaping and people still go by and that’s pretty special. I’m thankful I was able to do something that’s a lasting project.”

Nugent will begin the 20th anniversary of the attacks the same way he has started Sept. 11 for years: reciting the homily of Father Mychal Judge, the FDNY chaplain, on the radio.

On Sept. 10, 2001, Judge said: “You do what God has called you to do. You show up. You put one foot in front of another. You get on the rig and you go out and you do the job – which is a mystery. And a surprise. You have no idea when you get on that rig. No matter how big the call. No matter how small. You have no idea what God is calling you to.”

The next day Judge was killed at the World Trade Center.

Nugent wants make sure that future firefighters are taught about Sept. 11.

“That stuff needs to be talked about around the kitchen table. They need to understand what happened, when it happened and where it happened,” Nugent said. “I want people to never forget.”

Midway Fire and Rescue is hosting a Sept. 11 remembrance service on Saturday at its headquarters station in Willbrook.

The ceremony begins at 9 a.m. and is open to the public.

Featured speakers will be Fire Chief Doug Eggiman and Fire Marshal Mark Nugent, who will honor Austin Meares, the Waccamaw High School graduate who built the department’s 9/11 memorial as his Eagle Scout project in 2011. It includes a section of a beam from the World Trade Center.