A 12-hour walk offers a message of hope – Coastal Observer

A 12-hour walk offers a message of hope 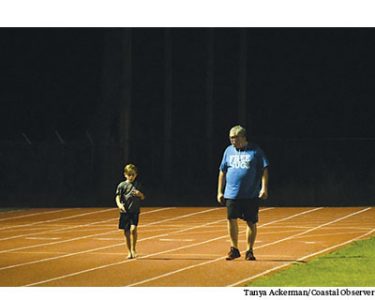 Tony Robinette, whose son Jesse died earlier this year, is joined by a child on the walk.

Anyone who wanted a hug last Saturday night had to look no farther than the Waccamaw High School track where more than a dozen people wearing “Free Hugs” shirts were taking part in the “R.I.S.E. Above The Darkness” mental health walk.
Jesse Robinette, a Waccamaw High School student, wore a “Free Hugs” shirt every day at a summer camp. But Jesse wasn’t at the walk. He committed suicide this past spring and his family and friends wore the shirt in his honor.
“What I tell everybody is to hug your kids every day and tell them that you love them every day because you never know when it’s going to be the last time,” said Tony Robinette, Jesse’s father. “That’s what we want to get out of tonight: to make sure that everybody knows that there are avenues.”
The 12-hour fundraiser raised more than $17,800 for nonprofits with programs that help people with addiction and mental health issues or that work with families to recognize warning signs and start conversations about the struggles kids are going through. R.I.S.E. is an acronym for recognize, intervene, support, enlighten.
The people gathered at the school wanted to show those who are struggling with their mental health that they’re not alone. Several gave personal accounts of their battles throughout the night.
Justin Annunziato, who helped organize the event, shared his struggle with alcohol and depression.
“The main goal is to open the conversation,” said Annunziato, who is the P.E. teacher at Coastal Montessori Charter School and assistant coach on the Waccamaw High varsity lacrosse team. “To let people know that they’re not alone and that we can overcome something that is so strong and that hopefully, by the end of this night, people can see something in themselves and know that they’re worth something because they are.”
Matt Whitman, who is the building manager at the charter school, came to support his co-workers and also his 9-year-old daughter Sophia.
“I’ve gone through my own battles with depression and suicidal thoughts,” said Whitman. “You’re not stuck by yourself, there’s a way to get help. It’s better to fight the struggle, the battle with your depression or drugs or alcohol, it’s better to fight that and get through it, than to end it all.”
Chris Bergeron, coach of the high school’s varsity lacrosse team, didn’t hesitate to get involved with this event.
“I got involved because it was the right thing to do and it was an easy step to take,” Bergeron said. “I want to be part of the solution for our community. I feel positive that this event is going to start us in the right direction.”
Bergeron was one of several of the high school’s coaches that took part at the walk.
“Some people don’t realize the impact that a coach and a teacher can have,” Bergeron said. “[After the two suicides], I had players sitting with me in the gymnasium all day long and we were just talking. Students everywhere were just looking for the answer to why. We can’t wait for change to happen, we need to step up and affect change ourselves. That’s something I’m trying to instill in my players, in my students and in particular the guys that came and hung out with me on those two or three days that they needed to have somebody to talk to. I want to be a resource for them.”
Tidelands Health was the main sponsor of the event.
“Tidelands Health is committed to mental health as well as our other programs and anything that’s impacting the community,” said Kelly Kaminski, Tidelands’s director of community resources. “So we want to make sure that we are here and showing the community and schools and everybody around that we do support this initiative and any initiatives that are working to help our youth and bring awareness to this important cause.”
The R.I.S.E. committee quickly awarded two grants from the walk’s proceeds. St. Peter’s Lutheran Church got $2,000 and Healthy Learners, which has a youth mental health first aid program, received $2,500.
“I thought it was very successful,” said Alan Walters, the Georgetown County School District’s director of safety and risk management, who helped organize the event. “Our goal was $15,000 and it looks like we’ll be closer to $18,000. We’ve learned some lessons on how we might make it a bit better for next year with some areas of improvement.”
“This community came together the way I was hoping it would,” Annunziato said. “Nothing really surprised me that night. I believed in the community.”