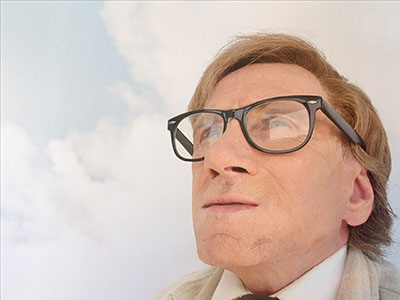 For the show, Oberst draws from Bradbury’s own words and is accompanied by video clips, an original score, plus snippets of classic Bradbury movies, such as “Something Wicked This Way Comes” and “The Martian Chronicles.”

“It’s all Ray’s words and his words are about hope,” Oberst said. “It’s not a hope that we can one day be perfect and then move out into space, and then clean up the planet and then clean up the mess that we’ve made of the world and then learn to stop being so damn cruel to each other. We can do it now. He said one day we’re going to be angels, and the next day we’ll be monsters, and the next day we’ll be angels again. This is what humanity is.”

Bradbury was Oberst’s favorite author when he was a kid growing up in Georgetown. In 2015, he got in touch with the Bradbury family to get permission to develop a show about the author. It took him three years to develop and write a script using Bradbury’s books and letters.

The show was designed as a one-man performance, with a voiceover of Bradbury’s wife, Maggie.

“The first thing people see on the screen is ‘to Maggie, with all my love, Ray,’” Oberst said. “Because she was, like so many famous men, behind them is an un-famous woman who makes it possible.”

During a stage reading in New York, Oberst discovered that everybody’s favorite part of the show was Maggie. So instead of a voiceover, the wife became a character and Oberst called his old friend, Stacy Rabon.

Rabon, who is the owner Kudzu Bakery in Pawleys Island, is also an actress who has been in television series such as “House of Cards,” and movies such as “Iron Man 3.”

She and Oberst are both familiar faces to audiences at the Strand Theater. Oberst has developed a series of one-man shows as well as doing film and television work. He divides his time between Hollywood and Pawleys Island.

“I’ve always thought that Stacy was remarkably talented,” Oberst said. “It’s amazing to be working with her again and playing a couple.”

“The material is great and the little scene is beautiful,” Rabon said. “He wrote it and it just flows great and it shows who her character is and their relationship.”

Oberst and Rabon collaborated on a couple of performances in Los Angeles and then he asked her to join him at Piccolo Spoleto.

“I think that [Stacy] understands about supporting other people,” Oberst said. “For that reason there seems to be some emotional connection, some spiritual connection to her doing this part.”

Oberst and Rabon said there’s a real camaraderie that actors have to have when performing on stage, as opposed to in a film or television series. They have to give themselves to each other.

“That’s what makes the emotional connection and that’s what people are reacting to onstage,” Oberst said. “It’s not the lines, it’s not the lighting. It’s two people laying down all of our pretenses, which we just don’t do very well anymore.”

Rabon is onstage for four minutes of the 90-minute show.

“It’s the part that people remember,” Oberst said. “In the end when Maggie comes back for a bow, they go crazy.”

Oberst and Rabon have known each other for a long time. They teamed up 16 years ago to perform “On Our Best Behavior” once a week during the summer at Brookgreen Gardens. The show featured classic radio routines such as Abbott and Costello, George Burns and Gracie Allen and The Bickersons.

“Each week we’d pull out an old routine from one of them and do it as if we were on the radio there at Brookgreen in the courtyard,” Oberst said. “It was a very strange thing to be doing at Brookgreen.”

Bradbury always talked about “late in time.” Now 53, Oberst is staring at his legacy.

“I spent so much time trying to be famous, now late in time I’m trying to do something that matters, I hope,” he said.

“At some point you just want to have a part that you can really enjoy instead of just making a few dollars,” she said.

Oberst has already scheduled shows in February in Walla Walla, Wash., and Atlanta. He is also negotiating with the Bradbury estate to perform at the author’s 100th birthday celebration, which is still in the planning stages. Bradbury was born Aug. 22, 1920.