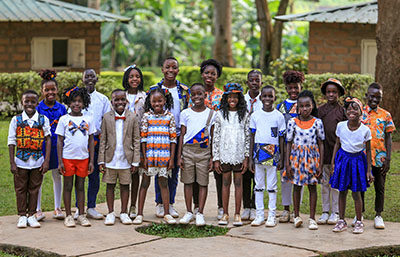 Choir 96 will perform in Murrells Inlet and Georgetown.

A choir of African children  perform at Georgetown Presbyterian Church on Wednesday as a way to give their testimony, spread the Gospel, and raise money for people back home.

Mary Lu Norris, director of music ministries at the church, views the concert as a community outreach project, and said she hopes to see people from all over Georgetown County in the audience.

“I just want the community to come see this. I think it’s going to be colorful and full of energy,” Norris said. “There’s something very hopeful when you see kids singing.”

Choir 96 is one of two choirs based at Watoto Church in Kampala, Uganda, which was planted by Americans Gary and Marilyn Skinner in 1984. The choirs began touring in 1994 and are comprised of Ugandan children who have lost one parent or both, according to Kelsie Nussel, communications director for the Watoto USA office. Watoto holds auditions for the local children and the ones selected rehearse for five months before heading out on tour.

“It is a life-saving ministry,” Norris said. “They tell the story of being in dire circumstances and the journey musically. … It’s a universal problem. It doesn’t just happen in East Africa. We certainly have our share. … I would like people to apply [the kids’] story to the local scene.”

The two Watoto choirs tour the United States separately every year, with a few months of overlap in mid-winter. Choir 96 arrived in September and will wrap up its tour of the East Coast on March 10 in Plant City, Fla.

Choir 98 arrived this week and will tour the middle of the country from Texas through Michigan until early July. Choir 98 will then return for its next tour in January 2020.

In September, Choir 96 returns for a tour of the West Coast.

“They get to see a lot of the U.S. they’ve never seen before,” Nussel said. “They’ve heard a lot of stories.”

The choirs usually performs six days every week, sometimes twice a day. The kids have school during the day conducted by their adult chaperones. During days off there’s time for sightseeing, like a visit to the National Zoo in Washington, D.C., or a planned trip to Disney at the end of the tour. The kids also got to see snow for the first time last month.

There are 18 members of Choir 96 and all are on their first tour. The oldest is a 13-year-old girl. The choir is directed by Edwin Kigozi, who was a member when he was a child.

Kigozi “gives the kids someone to lean on and a mentor,” Nussel said. “He knows what they’re walking through.”

Nussel said the choirs perform at a lot of the same churches every year, but there are also people in the group’s Tampa office charged with finding new churches to host them. There are also churches that hear about the choirs and request a show.

Choir 96 is first of the two choirs to tour in support of Watoto’s new CD “We Will Go.” The concert features selections from the CD in English and Swahili, testimony from the kids, and videos of the church facilities and residents in Watoto.

“It’s a way for the children to share their story, spread the word of God and share the story of what the church has done for them,” Nussel said.

Norris received information about the choir in the mail in early November, and said it has been a whirlwind trying to get everything organized. First she had to get permission for the concert from the church, then she had to find nine families willing to house and feed the kids and chaperones for one night, people to help set up and take down the choir’s equipment, and someone to provide dinner before the show and bagged lunches for the kids and chaperones to take with them when they leave.

After the show the kids will spend some time interacting with audience members.

“They love getting to know people who have just experienced the choir,” Nussel said.

Norris said an area will be set up under the church’s portico where choir representatives will be selling CDs and items from home.

Wednesday’s concert in the Georgetown Presbyterian Church sanctuary will begin at 7 p.m. and is free. The church is next to Georgetown Memorial Hospital on Black River Road in Georgetown.

To learn more about the choirs, or to hear some of the music, go to watoto.com. People can also sponsor a choir member or make a donation to the Watoto ministry on the website.