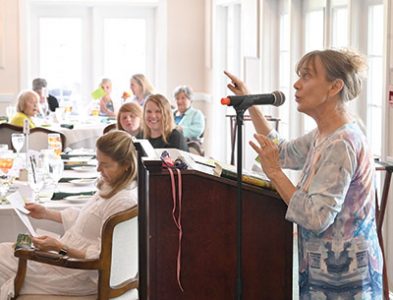 When James Patterson spoke at a Moveable Feast this month, 360 people sat down for lunch at Pawleys Plantation to hear the best-selling author.

Preparing for the event was like planning a major wedding, said Linda Ketron, who founded the literary luncheons 25 years ago.

“Most weddings have 200 people and seating charts. You have to make sure the food is right and people who have allergies are taken care of,” Ketron said. “That’s what we did, and my little team did a beautiful job, and we delivered it. But none of us want to do it again.”

Ketron is taking the Moveable Feasts smaller and more local.

“I think for a quality experience, you just need somebody that’s paying close attention to the audience,” Ketron said. “When the audience is 360 people, it’s just a blur.”

Ketron used the name of an Ernest Hemingway book when she began the series. Moveable Feast was a metaphor for the richness of life in Paris during the 1920s, meaning that a person takes a little piece of the culturally-laden city with them wherever they go.

What started as a six-week series that attracted 30 or 40 people listening to local or first-time authors, grew in 2004 to weekly events attended by hundreds of people meeting some of the world’s best known writers over lunch every Friday.

Most years, there were 52 luncheons, except when Christmas fell on a Friday. There were even feasts the day after Thanksgiving.

“We did Black Friday as an alternative to shopping,” Ketron said.

In the last five years, there have also been a lot of  luncheons on Tuesdays because that’s when new books are released.

The larger events with nationally-known authors will continue with Olivia Meletes-Morris and Wendy Meletes, the owners of Litchfield Books, at the helm.

“It’s really what I want,” Ketron said. “The book store and I have different visions. They want bigger, more James Patterson. Since I don’t, the logical thing was to step aside and let them take the whole thing where they wanted to go.”

Litchfield Books has been Ketron’s partner in Moveable Feasts since the beginning. She calls the store the “primary recruiter” of the authors.

“More power to them. May they have huge success,” she added. “I hope that it all works.”

Last week’s luncheon with Mary Alice Monroe at Kimbel’s in Wachesaw Plantation was Ketron’s final collaboration with the book store.

Ketron first hosted Monroe for a Moveable Feast 20 years ago after the publication of “Beach House.” More visits followed.

“We’ve been through her whole career together so it was very fitting,” Ketron said.

It wasn’t a sad day, she added.

“Talk about a swan song. If she’s not a swan I don’t know who it would be,” Ketron said. “She is grace and heart personified. She just opened her arms to the whole crowd and it was lovely.”

She recently wrapped up “A Curator’s Legacy,” the latest book by Robin Salmon, vice president of collections and curator of sculpture, for Brookgreen Gardens.

The book features nearly a dozen presentations Salmon has done during the last 16 years about the history of the gardens, its founders, Archer and Anna Hyatt Huntington, and the people who lived on the plantations that make up Brookgreen.

“She has made such a difference in art and the curation of art for that garden,” Ketron said of Salmon, who has worked at Brookgreen for 47 years. “It’s another great book about the area.”

Last September, Ketron closed Art Works, which was her office and shop in the Litchfield Exchange that sold the work of local artists. She now works out of her home office and has seven books in various stages of production for CLASS publishing.