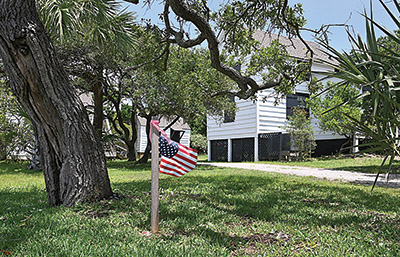 The listing for sale of the LaBruce -Lemon house prompted debate over historic preservation.

The proposed ordinance came days after the town Planning Commission agreed that something needs to be done to protect the 19th century buildings that led to the Pawleys Island Historic District being included in the National Register of Historic Places nearly 50 years ago.

“That’s exactly what we all want,” said John Hildreth, who chairs the commission. “We’re going to regret it forever if we don’t.”

Commission members discussed the concept in a conference call with former Charleston Mayor Joe Riley and Winslow Hastie, the president of the Historic Charleston Foundation.

“They thought it was real important to look at the whole island,” Hildreth said.

In Charleston, approval is required to alter buildings over 50 years old. Those of 100 years and older cannot be altered.

But while commission members agreed that a historic survey of the island would be a good starting point, they wanted to do something sooner to preserve the eight oldest houses in the historic district and the Pawleys Island Chapel.

Those could not be “demolished, modified, removed or relocated, in whole or in part, nor shall the exterior architectural appearance of any Historic Structure which is visible from a public right-of-way be altered” without approval of the Architectural Review Board, under the draft ordinance sent to Town Council.

Mayor Brian Henry said the town needed to get feedback from the property owners before considering an ordinance. He noted that the architectural review process is still evolving.

“I think we may get to some level of that, but we just need to do more homework,” Henry said.

“I like the idea of taking a deep breath,” Council Member Guerry Green said.

The council received objections to the ARB from some property owners on the island’s south end, where the narrow lots could make it hard to comply with the “Pawleys Island look” that its design guidelines envision.

Martha Jones, whose family owns a house on Springs Avenue, told the council in an email this week that the Planning Commission should focus on protecting structures in the historic district “rather than throwing the entire island into a narrow minded, burdensome HOA regime.”

The town “created a problem that the great majority of us didn’t view as a problem or even know we had,” Jones said.

The historic preservation discussion emerged from the creation of that ARB and the listing of the LaBruce-Lemon house for sale. It was standing in 1858, and is thought to be among the first houses erected on the island.

“They’ve already told prospective buyers that it can be subdivided,” said commission member Robert Moser, who talked with the owners and their agents. He told the commission that one prospective buyer backed out saying, “I don’t want to be known as the person who bulldozed LaBruce-Lemon.”

With an asking price of $4.25 million, the subdivision of the oceanfront lot will be the first thing that comes up, commission member Ed Fox said.

But he added that the town needs to have a comprehensive plan for identifying historic houses. “They’re going to come after you if you start picking and choosing,” Fox said.

The houses included in the National Register application are a starting point, he said.

Hildreth suggested that 75 years might be a starting point for historic status.

The commission agreed to continue the process, based on the feedback from Town Council.

It also agreed to start looking at tree protection.

Commission member John LaMaster reviewed ordinances from Charleston and Kiawah Island. “We need an arborist to advise us,” he said.

The commission will start by getting input from members of the board of the nonprofit Pawleys Island Beautification Foundation, which maintains the Nature Park next to Town Hall.