After Black Friday and Cyber Monday, hopes for Primary Tuesday 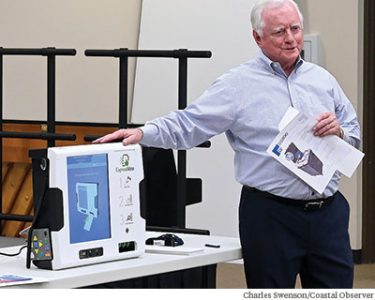 New touchscreen voting machines will make their countywide debut for the GOP primary.

Poll workers estimated between 300 and 400 people showed up to vote for the Georgetown County sheriff’s candidates during this month’s Pawleys Island Town Council election. They went away empty handed. The candidates hope those voters will return for the GOP primary next week.

Turnout is traditionally low for special elections, even those that aren’t competing with the holiday season. As of Monday, 334 people had voted absentee, according to Kristie Richardson, director of Voter Registration and Elections.

Darryel Carr, a former deputy, and Carter Weaver, the acting sheriff, are seeking to fill the unexpired term of Sheriff Lane Cribb, who died in September. Carr said he has been campaigning door to door and has a couple of drop-ins planned. Weaver has maintained a full schedule of meet-and-greet events. (Read interviews with the candidates here.)

“We’re getting ready to make phone calls to get people out to vote,” Anderson said. “Whether that works in this kind of special election…?”

The party did the same thing for a special election in County Council District 5 in September.

He has framed the election as a referendum on the performance of the sheriff’s office over the 18 years he was Cribb’s assistant sheriff.

Carr, who is making his fourth run for sheriff, won nearly 39 percent of the vote in 2016, when he ran as a Democrat. Birt Adams, who ran as an Independent Party candidate, got 2 percent. Adams filed as a Democrat in this special election, but won’t appear on the ballot because he didn’t file the required affidavit of qualifications in time.

Carr complained to the state Election Commission last week after he heard from a supporter who was voting absentee. A poll worker asked if the voter, who is African-American, was aware that this is a GOP primary, Carr said.

Dean Smith, who chairs the county elections board, said he was aware of the complaint.

“People have been coming in wanting to vote for a Democrat,” he said. “They were just trying to make sure everyone knew.”

Smith said the election workers were asked to be more careful in how the posed the question.

Tuesday’s primary will be the countywide debut for new touchscreen voting machines. Richardson said people who have used them to vote absentee have been pleased. Voters get a blank paper ballot that is inserted into the touchscreen device to record their vote. They get to look at the printed copy before inserting the ballot into a scanner to actually cast their vote. The scanner stores the paper ballots if needed for a recount. The system does not connect to the internet.

Unless there is a write-in campaign on Feb. 4, the winner of Tuesday’s GOP primary will be the next sheriff. But he won’t have time to rest. Filing opens in March for the 2020 election. A new round of primaries will be held in June.

Check your voter registration and find your polling place at scvotes.org.