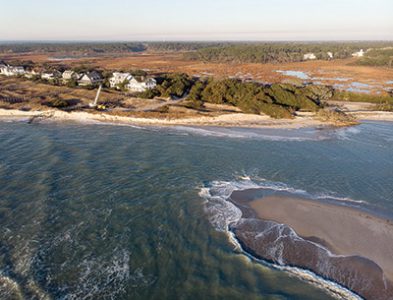 Pawleys Inlet has moved south toward the Prince George property.

A state agency has moved in Circuit Court to dismiss claims from Prince George property owners that a beach renourishment project on Pawleys Island caused erosion on their beachfront.

The Department of Parks, Recreation and Tourism helped fund the $14.8 million project, which was completed in the spring of 2020. It was named along with the town of Pawleys Island, the state Department of Health and Environmental Control  and two private firms in a suit filed in May by Bud and Melesa Watts seeking to have Pawleys Inlet restored to its location before the renourishment as well as payment for damages.

In a motion filed last week, attorneys for PRT said the couple failed to follow the procedure outlined in state law for challenging the permit for the renourishment that was issued in 2018. They also waited too long to file suit, the agency said.

“Because Plaintiffs did not challenge the permit at issue in this case and do not allege that they challenged said permit in the Complaint, their claims are therefore barred for failing to exhaust their administrative remedies,” according to PRT’s filing.

It said the Wattses knew of the purported damage to their property.

“The Complaint on its face demonstrates that Plaintiff acted with unreasonable delay in initiating their action,” the agency said.

In their suit, the Wattses said they received no notice of the town’s permit application from DHEC, which they said is a violation of state law and policy.

They also said that the southern end of Pawleys Island migrated south by 300 feet since the renourishment was completed, causing Pawleys Island to move with it and eroding 5 acres of beach and dune in front of the Wattses’ oceanfront house and their adjacent lot.

Bud Watts is also the owner of 1,065 acres at Prince George that he placed under a conservation easement in 2020. The suit said that the shift in the creek had damaged the maritime forest on that property.

The town of Pawleys Island denied all the allegations in the suit in a filing last month.

This week, DHEC filed a similar response. But the agency also went on to say that even if there was damage, “this Defendant did not and could not have foreseen that Plaintiffs’ damages, if any, could have proximately resulted from this Defendant’s alleged acts or omissions.”

The Watts suit claims the permit failed to consider impacts of the renourishment on the adjacent property or require a mitigation plan.

“The methods, standards and techniques utilized in managing the beach renourishment in question were in conformity with the generally recognized, reasonably available and reliable state of knowledge in the field at the time,” DHEC said in its filing.

It also said the Watts suit was not filed within the two-year statute of limitations.

Coastal Science and Engineering, which designed the project, also denied the allegations in the suit. Those include a claim that a 2010 study by the firm predicted the impact that beach renourishment would have on the inlet.

Coastal Science acknowledged the study, but noted it was “for a different client.”

The work was done for the Prince George Community Association.