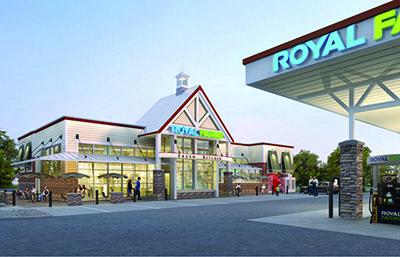 A rendering shows the standard design for Royal Farms stores.

Property owners along a stretch of Highway 17 between Pawleys Island and Litchfield are organizing to oppose plans for a convenience store at the corner of Ford Road.

“If we don’t work together, we’re not going to win this,” Jackie Harris, president of the homeowners association at Hidden Oaks, told about 80 people who met at Waccamaw Library.

Royal Farms, a chain of 260 convenience stores in the mid-Atlantic states and West Virginia, presented the HOA with its plans for a 5,154-square-foot store and restaurant this fall.

Property owners were not impressed. “We know the negative impact it will have on our community,” said Don Tyson, a board member.

Those include increased traffic and stormwater runoff and decreased property values, residents said.

The HOA was told by the project’s engineers that they expected the store to generate 4,100 car trips a day.

“That spells, to me, accidents, congestion and backups,” Tyson said.

The property is zoned “general commercial,” which allows convenience stores. Commercial buildings on Highway 17 on Waccamaw Neck have to comply with design rules that cover such items and roof pitch, color and materials. No permit applications have been submitted for the store, said Holly Richardson, the Georgetown County planning director.

While the store won’t come up for a public hearing unless it seeks a variance to the county codes, Harris believes the community can block the project “if we can be the biggest burr under their saddle.”

Several years ago, Hidden Oaks was able to deflect an effort to develop the site as a Bojangles fast food restaurant by doing just that, she said.

Hidden Oaks is a neighborhood of 24 duplexes developed by Portrait Homes between Highway 17 and what is now Stables Park. The company also owned 2.77 acres of commercial property on the highway. The commercial property was specifically excluded from the covenants that cover the residential portion of Hidden Oaks, according to county records. But the deed for that property carries a restriction that gives the developer the right to approve the site plan and elevations of buildings along with their colors. It also requires approval of landscaping and lighting.

“We’re currently investigating the applicability of those restrictions,” Tom Winslow, the attorney who is working with the Hidden Oaks association, said this week. “Remember that we’re all neighbors and we need to look out for each other.”

Royal Farms did not respond to an email seeking comment.

There is also a restrictive covenant that bars any disturbance of almost an acre of wetlands and an upland buffer on the south side of the commercial property. That was placed on the property in 2013 by the current owner, TAG Ventures of Charlotte, following a complaint that wetlands had been filled in violation of federal regulations.

The Army Corps of Engineers issued a permit for the filling, but the S.C. Environmental Law Project argued that the agency made a mistake because the wetlands were adjacent to the tidal waters of Clubhouse Creek. The covenant states that it is for “compensatory mitigation.”

Peter Horn, who was the president of the Hidden Oaks association at the time, said that development on the remaining property will impact the marsh because the drainage runs under the highway. He urged the surrounding neighborhoods to agree to hire an attorney to fight the project.

“There’s no a legal reason to stop it,” Art Murphy, a retired architect who served on the planning board in Reston, Va., told the group. “Just because you don’t like it isn’t a reason to deny it.”

He suggested the opponents try to negotiate with Royal Farms, but added “if you make it difficult enough for Royal Farms, maybe they’ll go to another site.”

Becky Ryon, head of the north coast office of the Coastal Conservation League, noted that the project will need stormwater permits from the state Department of Health and Environmental Control. The agency will hold a public hearing if it gets a request from at least 20 people, she said.

“I’d recommend taking that step before even considering hiring a lawyer,” Ryon said.

Although the project won’t trigger a county hearing, Marla Hamby urged opponents to register their concerns during the public comment period at Planning Commission meetings. Hamby serves on the commission, but said she was speaking not as a member but a “mad-as-hell citizen.”

She and Ryon also encouraged people to get involved in urging County Council to adopt a proposed update to the natural resources element of the county comprehensive plan. It includes a proposal to require buffers between development and freshwater wetlands as well as expanding the current 15-foot buffer for saltwater wetlands.

Duane Draper said there is also public comment during County Council meetings. He chairs the citizens group Keep It Green, which has two lawsuits pending against the county over zoning and development issues.

Harris said the association board has talked about that.

“Right now, we’ve got to fight this,” she said.