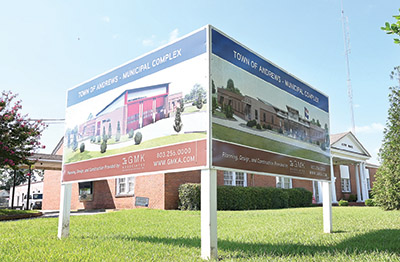 The town says it will default without more county funds for the $5.7 million project.

The town of Andrews has asked the Circuit Court to order Georgetown County Council to fund another $2.7 million in funds from a capital projects sales tax to complete its new municipal complex.

The town claims that the county violated state law in failing to fully fund the $5.7 million project and in allocating surplus sales tax revenue to other projects.

“The purpose of the Complaint is to immediately stop the overreached action of the Defendants and to vindicate the rights of the Town of Andrews, the residents of the Town and their rights to receive and expend Penny Sales Tax designated revenues without unlawful interference,” according to the complaint filed last week.

In 2014, county voters approved the 1-cent capital projects sales tax to fund $28.2 million worth of projects including dredging of the Winyah Bay shipping channel, dredging of Murrells Inlet, road improvements and rural fire stations. The referendum included $1.5 million for an “Andrews Fire/Police Complex.”

The sales tax expired after four years. It brought in an extra $12.5 million. In addition, $6 million approved as a match for federal and state funds for the Winyah Bay dredging was never spent since the total project cost rose from $33.5 million to $72.7 million.

The Andrews project is underway behind the current town facility, a block north of Main Street. The exterior is unfinished and only electricians were at work earlier this week. The building was also expected to receive matching funds.

“I repeated time and time again at churches and Rotary Club meetings that it was covering a partial cost of that project,” said Sel Hemingway, the county administrator at the time.

When matching funds didn’t materialize, the county agreed to allocate an additional $1.5 million to the Andrews facility.

“They got twice the amount of money that the voters approved,” Hemingway said.

But the town’s project also grew. Frank McClary, who became mayor in 2016, told the county in 2019 that the town had hired a design-build firm, GMK Associates of Columbia, for a “municipal complex.”  The cost was $5.7 million with the police and fire portion accounting for about 60 percent of the price.

“It’s always been a complex,” McClary said this week, adding that the police and fire departments have always shared space with other town government offices. “It’s pretty common sense to me.”

When he took office, McClary said, he was told that the $1.5 million in sales tax revenue for the town was “seed money” for the project. “The word seed money is not in any of these things,” he said, referring to the referendum that was approved by voters.

The county has rebuffed the town’s requests to fund the entire municipal complex. Last year, the council declared that the list of projects approved by voters had been “fully funded” with the money either spent or set aside, including the extra $1.5 million for Andrews. This spring, it approved $7 million in additional capital projects that will be funded by the surplus.

The members of the town’s volunteer fire department also told County Council in January that over half the space in the 11,558-square-foot municipal complex would be used for general administration. “We do not believe such was the intent of the citizens of Georgetown County” when the sales tax was passed, the volunteers wrote. They were concerned that the cost of the larger complex “and no other identified source of funding to bridge the gap will obligate the citizens of Andrews unduly.”

The town argues that the county violated state law in expending the surplus sales tax funds and asks the court to order the county to fund the balance of its municipal complex.

“Without the revenues from the Penny Sales and Use Tax the Town of Andrews will eventually default on its priority listed construction project payments,” the town said in its court filing.

The county has set aside the $6 million collected for the Winyah Bay dredging. It also has about $3 million of the sales tax surplus left.

Although McClary said he is confident the law is on the town’s side, “I can’t understand why it was not addressed properly” with the surplus. “Where is the humanity?”

The town, which has a $3.5 million annual budget, wants to be a partner with the county. “I don’t know why there was so much push back to support something that was needed,” McClary said.

This issue isn’t just about Andrews, he added. The county formed a committee last year to compile a new list of capital projects to be funded with a 1-cent sales tax collected over eight years. The tax was estimated to raise $90 million. The committee received $500 million in project proposals before County Council scrapped the idea of a new referendum.

“The capital projects sales tax is a good tool, but it has to be done fairly,” McClary said.